Skilled Workers’ Training in Schwäbisch Hall
Day Care in the Morning, Language Class in the Afternoon – A Recipe for Success

Faced with the current economic situation in Spain, 13 educators from Spain were drawn to Schwäbisch Hall where they are working in the city’s day-care centres while learning German at the Goethe-Institut.

Laura Jimenéz Segura (22) and Maria Prieto García (25) come from Spain. Despite their qualifications, the primary school teachers cannot find jobs due to the economic situation in their home country. The women therefore applied to the city of Schwäbisch Hall, which aims to counter its shortage of skilled workers in the city’s day-care centres by recruiting in Spain. In October 2020, 13 educators – two men and eleven women – arrived in Schwäbisch Hall, two of them even accompanied by their families.

In the morning, an internship in the day-care centre, in the afternoon, a language course at the Goethe-Institut is their daily work routine now. Mastering the German language is the most important prerequisite for the integration of the Spanish staff in the twelve day-care centres – and the most pressing problem. They previously completed their first language course in Spain; mainly at home at their computers due to the pandemic. “Learning a language that way is hard,” says Segura. García nods in agreement, adding, “Your concentration fades fast at the computer.” 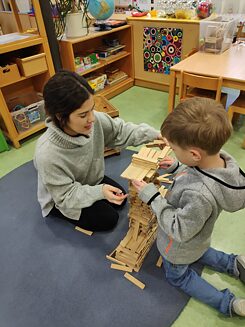 Laura Jimenéz Segura was hired by the day-care centre in the district Gailenkirchen in Schwäbisch Hall. | Photo (detail): © Tanja Kurz Fortunately, things are different in the course with Carmen Förtsch, the language teacher at the Schwäbisch Hall Goethe-Institut. The class is held in a large adjoining building of the institute with its own entrance, so teachers and students can keep the necessary distance. Today’s subject is media use then and now. Carmen Förtsch offers prompts, asks questions, writes vocabulary on the whiteboard. “We’re learning according to subject units,” explains the language teacher, “the vocabulary is embedded in the context.” At first, her students respond cautiously, but gradually the conversation begins to flow. Förtsch is understanding, noting, “They’re sometimes frustrated because they don’t understand as much or because they can’t express themselves as they wish.”

Not all of them had already reached the B1 level, explains the language teacher. B1 enables them, for example, to understand main points and to express themselves simply and coherently on familiar topics. However, the aim of the language course at the Goethe-Institut is to reach language level B2. Those who pass the exam can understand complex texts and communicate spontaneously and fluently. “Only when the educators have reached that level are they counted towards the childcare ratio of the day-care centre,” assures Christoph Klenk, head of the department of early childhood education, schools and sport. After all, language teaching is a central task in day-care centres.

At the same time, the 13 Spaniards are going through a recognition process by the Stuttgart Regional Council, in which their educational expertise and work experience are assessed. “Some still have to provide various additional qualifications,” explains Monika Pietsch. Still, the city’s head of training assesses the start of the project positively, “Nationwide there’s a shortage of 250,000 to 300,000 professionals in the day-care centres, so the city is happy to invest heavily in language courses.”

Laura Jimenéz Segura and Maria Prieto García, who, like most of their colleagues, live in the Goethe guest house, met and became friends in Schwäbisch Hall. They are also accompanied by tandem partners that the Goethe-Institut has placed with them for their start in the new city. “We go for walks and talk with each other,” says Maria. “I’ve even been invited to dinner,” reports Segura. “Friendship is important,” the two agree, “It would be very, very difficult alone.”

Tanja Kurz is a freelance journalist who previously worked as an editor for the Stuttgarter Nachrichten and as editor-in-chief of the Haller Tagblatt.

In view of the increasing need for staff in day-care centres, the city administration of Schwäbisch Hall, together with the Kolping-Bildungswerk, recruited specialists in Spain. As a result, a special course was launched at the Goethe-Institut Schwäbisch Hall for the qualification of educators from Spain.