Artist Ayzit Bostan presented her art installation “Parasol” as part of the series “Munich Unique” by the Goethe-Institut in Paris. Guests included the German ambassador Hans-Dieter Lucas and the mayor of the 16th arrondissement, Francis Szpiner.

It’s a rainy July day in Paris. Guests huddle under the porch of the Palais Galliera to attend the unveiling of Ayzit Bostan’s art installation “Parasol”. ‘It would have been better to hold the exhibition in summer’, joked Francis Szpiner, mayor of Paris’ 16th arrondissement, in his opening speech.

Bostan’s installation was inspired by abandoned beach umbrellas at the end of a summer season; without further ado she transferred them from a sandy to an urban environment. Embedded in a concrete base, the umbrellas can now be seen in the garden of the stately Palais Galliera. Resembling clouds, the four ecru-coloured fabric umbrellas create shade and an oasis of calm in the centre of the Parisian hustle and bustle. ‘It represents my personal longing for summer that I have brought into the public sphere’, says Bostan about her work.

The fact that Bostan’s artwork is not hiding behind panes of plexiglass or thick museum walls, but is freely accessible as an installation in the garden of the Palais Galliera, has a special symbolic character. “Parasol” creates a bridge between concealment and recently recaptured public life. The work becomes a place of retreat that recalls the light-heartedness of warm summer days and invites people to take a seat and pause for a while. ‘Bostan’s work facilitates an exchange that has become particularly precious during the corona pandemic’, said the German ambassador Hans-Dieter Lucas. 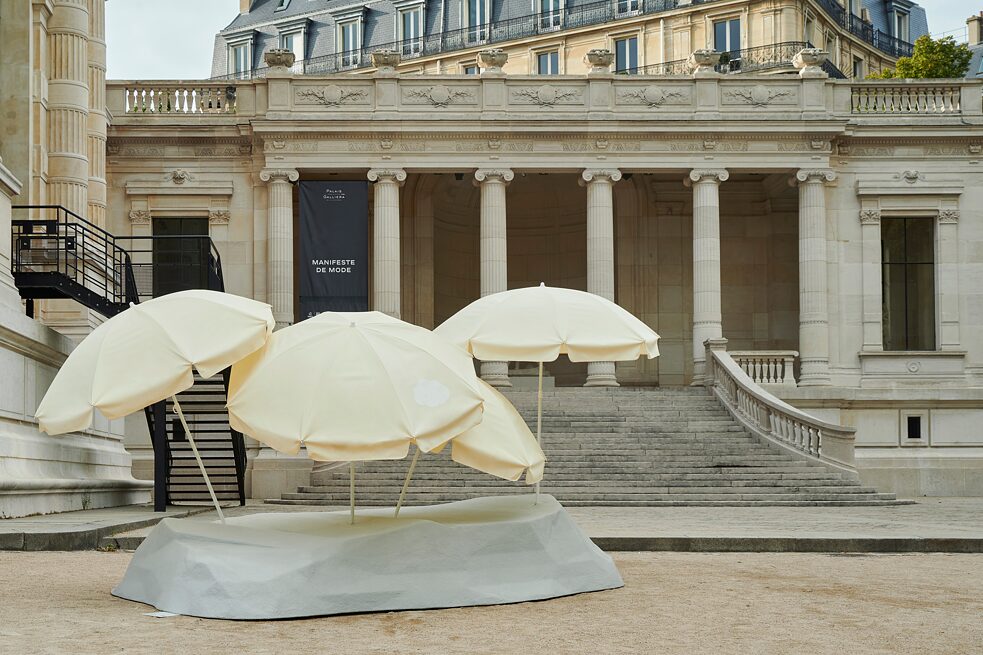 At the interface between design and art

The installation should actually have been unveiled two years’ ago in Paris, but the opening had to be postponed owing to the pandemic. ‘We are delighted that we have finally been able to start this magnificent project’, says Laura Sanchez Serrano from the Department of Arts and Culture in Munich. ‘The project “Munich Unique” allows us to present our cultural scene to an international public. In this way, the artists can also develop a network in Paris.’ The fact that so many visitors defied the rain to attend the exhibition shows that this experiment has been successful.

The Palais Galliera, which is a museum of the history of fashion, is a particularly suitable place for Bostan’s artwork: ‘We were naturally particularly pleased to welcome the work of a fashion designer on our premises’, remarks Miren Arzalluz, director of the Palais Galliera. A trained dressmaker and pattern cutter, Bostan’s work is a coalescence of design and art. Based in Munich, Bostan’s activities often take place in the public sphere: She recently decorated the billboard of the Department of Arts and Culture on Lenbachplatz; in 2012 she presented the art installation “Replika” in the Munich Hofgarten together with Gerhardt Kellermann.

Even if the weather hasn’t played along today, “Parasol” will have an opportunity to provide shade for its public: The installation can be viewed until 29th August in the garden of the Palais Galliera in Paris. It then moves to Munich.

“Munich Unique” is an initiative of the Goethe-Institut in Paris supported by the Department of Arts and Culture, the Bavarian Federal Ministry for Science and the Arts and the mayor of the 16th arrondissement in Paris. From September, you will be able to see the installation “Parasol” in the Pinakothek der Moderne art gallery in Munich. Munich’s twin city, Bordeaux, is presenting another of Bostan’s works at the same time: a flag printed with a cloud motif