In April, the first of five bauhaus imaginista exhibitions opened in Hangzhou in the presence of Johannes Ebert, the Secretary General of the Goethe-Institut. Throughout the year, studies by international researchers and artists will be published in the associated online journal. The curator of the exhibition chapter in Hangzhou, Eduard Kögel, writes about Walter Gropius and his relationship with Chinese architecture.

Between 1919 and 1933, not a single Chinese student studied at the Bauhaus in Weimar or Dessau. Henry Huang was the first to follow former Bauhaus director Walter Gropius from London to Harvard in 1937. Gropius taught several Chinese students during his fifteen years as a professor at the Harvard Graduate School of Design between 1937 and his retirement in 1952. In addition to Henry Huang they included Wang Dahong, Chang Chao-kang and Ieoh Ming Pei. 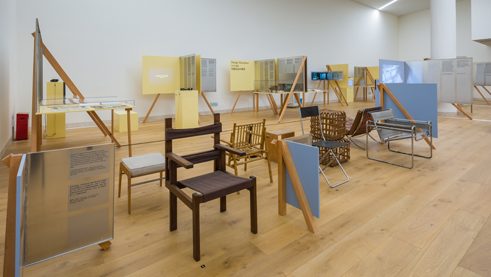 The foundation for contemporary Chinese architecture

Although Gropius had distinct ideas about architecture and history, he allowed the students to find their own way. In an interview, Pei recalled, “Gropius was a good teacher because he never allowed himself to be subjective. He allowed me to do something different on my own to show that I was right.” By believing in his own tradition and transforming spatial relationships with new technologies, Pei laid the foundation for contemporary Chinese architecture. But in the same interview he mentioned the influence Mies van der Rohe had on his architectural approach. “I was influenced by Mies’s aesthetics, not by Gropius.” [...] 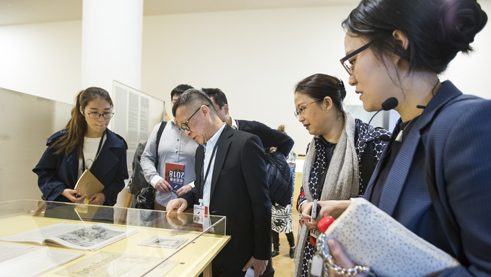 Walter Gropius never visited Shanghai, but was commissioned by the United Board of Christian Colleges in China to design a new university campus there after the war. Although Gropius had previously dealt with educational buildings many times, it was never in these dimensions. The planning was based on 3,000 students, of which about 1,000 would live on campus. In addition, Gropius’s knowledge of Chinese culture and architecture came from books at most and he may have recollected discussions with students such as Wang Dahong or Henry Huang. But it was I. M. Pei who had just proven in his thesis that he could translate Chinese traditions into contemporary solutions. In July 1946, Pei was appointed lecturer for architecture at Harvard’s Graduate School of Design and Gropius asked him to work on the university project in Shanghai. 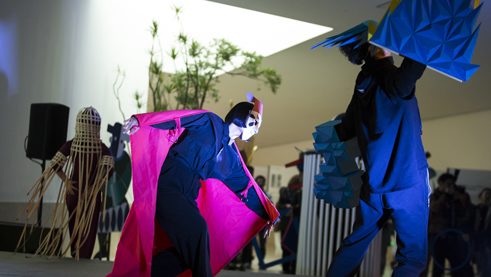 bauhaus imaginista: Performance at the opening | Photo: Ye Zhi The design for Hua Tung University in Shanghai would never have been realised in this way without the cooperation of I. M. Pei. In his Master’s thesis, Pei had developed an idea of ​​how modernity should be integrated into the regional context of his homeland, and Gropius was obviously fascinated by his reduction to a few modular elements that created a harmonious image in contrast to the landscape that was beyond kitsch. The spatial qualities of the historic buildings and the aesthetics inspired by Mies van der Rohe enabled a radical alternative to the usual Beaux-Arts approach of his colleagues in China. The relationship to nature and how it could be designed in such a way that the architecture integrated itself in it was a distinguishing feature of the design and architectural stance. With the museum design for his Master’s thesis at Harvard and his work for Hua Tung University in Shanghai, Pei sought a contemporary language to renew the architecture of his homeland, which would keep him busy long into old age.

This is an abridged version of the original article from the online journal at www.bauhaus-imaginista.org

There is a Kulturzeit report on the bauhaus imaginista opening in Hangzhou in the 3sat media library.