The awardees of the Goethe Medal with the laudatory speakers and the president and executive committee of the Goethe-Institut. | Photo: Maik Schuck

The Colombian theatre-makers Heidi and Rolf Abderhalden of the Mapa Teatro collective, the Swiss-Brazilian photographer and human rights activist Claudia Andujar and the Hungarian composer and conductor Péter Eötvös were awarded the Goethe Medal on 28 August. Claudia Andujar announced she would share her award with the speaker of the Yanomami, Davi Kopenawa Yanomami.


On 28 August, for the tenth time, the Residenzschloss in Weimar was the festive setting for the conferment of the Goethe Medals, with which the Goethe-Institut has honoured special contributions to international cultural dialogue since 1954. The selection of awardees was based on the motto “Life after Catastrophe.” On the 269th birthday of Johann Wolfgang von Goethe, it brought together people of diverse artistic walks of life: the Colombian theatre-makers Heidi and Rolf Abderhalden from the Mapa Teatro collective, the Swiss-Brazilian photographer and human rights activist Claudia Andujar and the Hungarian composer and conductor Péter Eötvös. All of them, after existential catastrophes and breaches, had in their own way “made new beginnings possible through the power of culture,” said the president of the Goethe-Institut, Klaus-Dieter Lehmann, in his opening speech. “All four awardees see artistic expressiveness as an essential element of human coexistence and participation. Without cultural understanding, without dialogue, our world becomes ever less understandable. It needs people who are actively committed to cultural mediation, who also have the ability to deal with cultural differences, whether in South America, Africa, or Europe.” 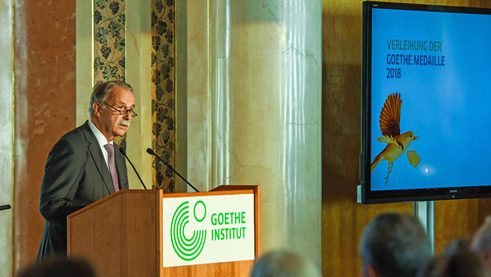 In his opening speech, President Klaus-Dieter Lehmann talks about the essential work of the awardees. | Photo: Maik Schuck

In her welcoming address Michelle Müntefering, the Minister of State for International Cultural Policy, brought six-year-old Goethe to mind, whose childlike composure was once lastingly shaken by reports of the earthquake in Lisbon. Following this formative impression, catastrophes and personal tragedies would always serve as the inspiration for his later life’s work. In line with this, the motto of this year’s award ceremony opens our view to the future. International cultural work such as that done by the Goethe-Institut will become increasingly important in the future, emphasised the Minister of State at the Federal Foreign Office, saying, “It can help to strengthen freedom.” 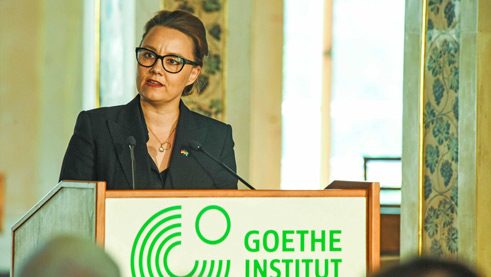 Michelle Müntefering on the importance of international cultural work for the future. | Photo: Maik Schuck The laudatory speeches conveyed a multi-layered image of the present-day challenges that the honourees face. Playwright Deniz Utlu praised the courage of Mapa Teatro to openly and repeatedly address problems and conflicts of Colombian society in their “experimental laboratory” of different artistic genres. It is shaped by a cosmopolitan spirit that doesn’t forget the local situation but “also shakes our centrism here on the other side of the Atlantic,” said Utlu. 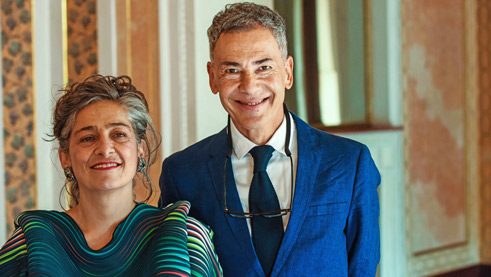 Surprise announcement during an acceptance speech

Anthropologist Stephen Corry lauded the photographer and human rights activist Claudia Andujar for her many years of dedication to the Yanomami people of Brazil. The more than 60,000 photographs of this threatened population on the Amazon and the constant commitment of the now 87-year-old ultimately contributed to their habitat being declared a protected area. Deeply moved, in her acceptance speech for the medal the artist and activist spontaneously announced that she would share her award with the tribe’s speaker, Davi Kopenawa Yanomami. 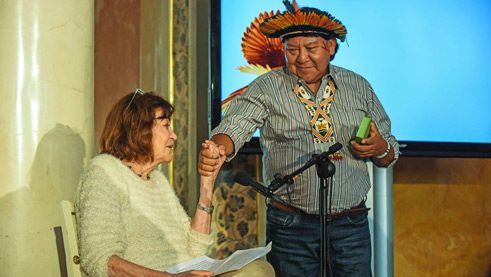 Claudia Andujar shared her award with the tribal speaker Davi Kopenawa Yanomami | Photo: Maik Schuck In his laudatory speech for the Hungarian composer Péter Eötvös, writer and playwright Albert Ostermaier unfolded an opulent theatrical scenario around his work. Eötvös is both a linguistic and voice acrobat, he said, “His music speaks all languages and every piece speaks a new one” and the voices “merge into a universal language.” His compositions are “rocks in oblivion” and make the invisible visible. “He is the Shakespeare among composers,” Ostermaier summed up. Eötvös sent his acceptance via video since he was unable personally attend due to a premiere at the Lucerne Festival. His daughter Ann-yi Bingöl also expressed words of thanks on his behalf. 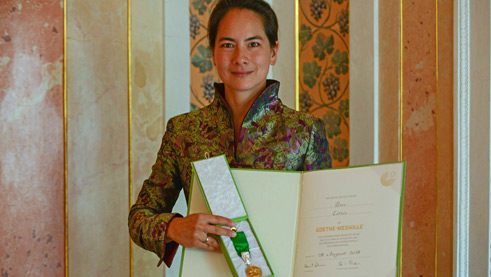 The Goethe Medal was established by the Executive Committee of the Goethe-Institut in 1954 and acknowledged as an official decoration by the Federal Republic of Germany in 1975. The Goethe Medal is conferred on 28 August, the birthday of Johann Wolfgang von Goethe. Since it was first awarded in 1955, a total of 348 people from 65 countries have been honoured.