For the third time, the Goethe-Institut Lebanon organized a Soccer Camp. More than 300 girls and boys aged between six and 17 each spent a week training at a total of four locations in Lebanon and then met for a final soccer tournament in Beirut. The training sessions were accompanied by a football3 qualification workshop with Hiba El Jaafil. In the interview, the former coach of the Lebanese U17-U19 women's team talks about her own football career and what she particularly appreciates about Soccer Camp.

When and how did you start playing football?

We lived near the beach, near Ouzai. I started playing there in the neighbourhood. My brother Hassan, who is six years older than me, played in the national football team. I played often with him and his friends and with my cousins and neighbours. But they were all boys and I was the only girl.

Do you remember at what age you started to play?

I was seven or eight years old. All the people near our home knew that I was the girl who knew how to play football. And I was better than the boys! You know when you divide two teams to play against each other - each side wanted me on their team.

Your father didn't like you playing soccer. Did you keep it a secret from him?

Yeah, first I kept it a secret, then later he knew. Whenever he was at work, I played secretly. But I had to make sure that I arrived home before him. Islam was very important to my father - he was of the opinion that women should cover themselves. 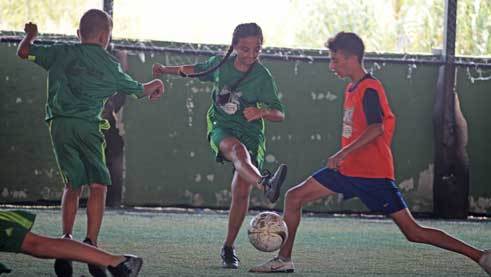 Fair play, equality and teamwork are the main focus of the training sessions | Photo: Alia Haju Do you think your father was so strict with you because you were playing football or hanging out with boys? What was the problem?

That I was outside. Not in the house. Especially after sunset. But listen to this: On the one hand, he didn't want me out playing soccer with the boys. On the other hand, he still took me to every game of Al-Anzar, one of the most successful teams in Lebanese football. We watched most of the first league matches together - all over the country, sometimes in Tripoli or Zahle. Later, when he noticed how much I liked football, and that I was playing with the boys - I was about eleven or twelve years old then - he just went alone, without telling me anything about it. So I stayed at home, crying and watching the game on TV.
My life changed suddenly when my father died, I was 13. One year later I joined a club.

Is it true that your brother supported you strongly, unlike your mother?

After my father died, my mother was responsible for us and concerned about what people would say – especially since my uncles lived next to our home. They’d say they were responsible for me and you know it was just talking. They were not really doing anything. My brother, he supported me so much. At first, he didn’t know my level. But when he saw me playing, he noticed how good I was. Even others noticed it and it finally made the round. He was proud of me and said to the others: "She is my sister".

What are you doing now - what is your current football career like?

I was a national coach for U-19 and U-17 – I stopped two years ago due to problems with the federation. Now I am the sports coordinator coordinating the PE teachers at the Evangelical School in Sidon. I also founded a football academy at the school - the NIEGB Tigers, National Evangelical Institute for Girls and Boys. It is one of the largest schools in Lebanon with two locations and around 2,000 students. We even got a brand new football pitch that can accommodate 4,000 spectators. 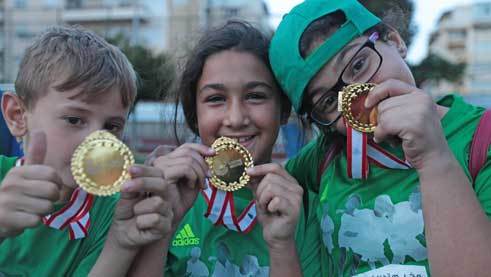 Team Tripoli wins the final tournament | Photo: Alia Haju Is it difficult for girls to join the academy?

Yes, it is. We only have two girls. So it has not changed very much from the time I was growing up. But in Beirut it is way different. I like to start with the girls from the age of seven so they can become very good players. During one of the sports lessons at the Evangelical School, where football was played, I discovered a talented girl. She was very interested in football. That's why I asked her mother to allow her to attend the academy. Now the girl is a member. Meanwhile she is one of the best.

At Soccer Camp the kids play Football3. What's so special about it?

Football3 consists of a pre-match discussion, the football game, and a post- match discussion. This way of playing differs in a number of ways from regular, competitive football in that the teams are mixed, bringing boys and girls together, and besides skills and goals scored, there is also the way of playing that gets rewarded – promoting sportsmanship, teamwork and gender equality. 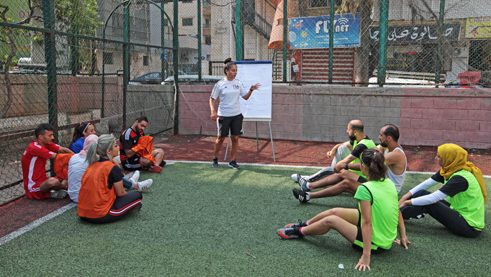 The message for the players is the most important thing. Children from Syria, Palestine and Lebanon play together. This shows them that there are no differences in our cultures. It is also particularly important for me as a woman to be able to watch self-confident girls play football. And I am pleased that I have been able to encourage many of them to do so. At the same time, these girls are seen as encouraging examples for those who have not yet dared.

Together with the Lebanese NGO Fingerprint of Change, the Goethe-Institut Lebanon organised the Soccer Camp 2018. This year, more than 300 children and young people played football together again. Sport unites. The football pitch is a place where tolerance, respect and fair play are further developed - skills that are also needed off the pitch. The Soccer Camp consisted of training weeks for children and young people at four locations in Lebanon, a final tournament in Beirut and a football3 qualification workshop for coaches. At the same time, around 30 young journalists and sports presenters reported on the training sessions and the subsequent tournament. In a film and radio workshop, they learned the basics of sports journalism and commented on the final matches.