OmniPresence, created by Danish performer and director Annika B. Lewis and her company Kassandra Production, helps to expand the artistic scope of P3M5 beyond dialogue-centric plays and films into the realm of performance and installation art.

The project takes place inside and around an obscure surveillance van in a public space. Once you take a seat in the mobile “Omnibus,” you discover a couple of bizarre, self-promoting double agents who go undercover to try to make sense of our all-encompassing surveillance society. The piece explores the balance of freedom, control, and self-promotion. As Annika describes it, “In a jumble of PGP keys and privacy policies, Clouds and DarkNets, leaks and likes, censorship and selfie-sticks, OmniPresence zooms in on the fly on the wall. Who’s watching who?” 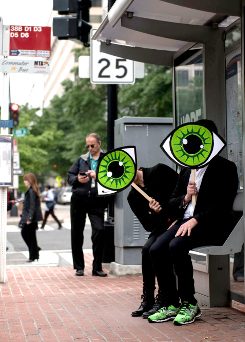 OmniPresence © Mukul Ranjan The piece opens May 2017 at Bora Bora, an organization which produces dance and visual theatre, in Aarhus, Denmark and will also be performed as part of CPH Stage in Copenhagen. Soon after its premiere, a video of the performance will be uploaded here.

The OmniPresence website, formatted as a security consulting firm to continue the play’s narrative, includes a mysterious promotional film, a “Free Webinar” (livestream of performances, available once they begin) and information about “Boot Camps” (performances in Aarhus and Copenhagen).

Kassandra Production, founded in 1998 by its artistic director Annika B. Lewis, is an artist-driven platform for innovative contemporary performing arts, working at the intersection of dance, theatre, media, and performance art. Its work challenges theatrical concepts and creates work characterized by a strong conceptual formulation and visuals which mix the trivial with the philosophical. Kassandra Production pieces use different perspectives, multiple fictional layers, and multimedia elements to explore new performative spaces, places, and concepts. Performances have been set up in private apartments, caravans, old factories, at fairs, in the media, and on the internet as well as in traditional theatre spaces. 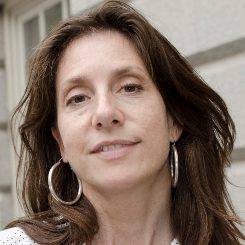 Annika B. Lewis (c) Mukul Ranjan Annika B. Lewis is a director, choreographer, actress, singer, performance artist, curator, mentor, ARTivist, and producer. Born in San Francisco, she was raised in Sweden and now lives in Denmark. She has been working professionally in the field of performing arts for over 25 years and is the founder and artistic leader of the artist-driven Kassandra Production. Her work challenges conventional norms of identity, gender, positions, perception, values, preconceptions and conventions. Using theatre and dance as well as multimedia and performance art she strives to visualize the invisible mechanisms that play such critical roles in our lives and societies. Annika’s work also explores the use of unconventional performance spaces and locations.  She studied at Larssons Theatre Academy in Gothenburg, Sweden; the Istituto di Arte Scenica in Pontremoli, Italy, and Scut/Gitis, the state theatre school of Moscow, Russia. In 2007, she won the Robert Mondavi Winery Cultural Award and in 2008, 2011, 2014, and 2016 she received the prestigious artist working grant from the Danish Arts Foundation.