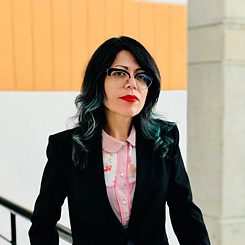 Photo: Liliana Falcón Sayak Valencia (Tijuana, 1980) earned her doctorate in Europe in feminist philosophy, theory and criticism at the Universidad Complutense Madrid. She leads the research professorship in the Department of Cultural Studies of the Colegio de la Frontera Norte. She is a member of the National Research System, Level 1.

She is a queer activist and transfeminist in Mexico and Latin America, as well as a poet, essayist and performance artist. She has given lectures and seminars on gore capitalism, transfeminism, chicano feminism, postcolonial feminism, queer/Cuir art and theory at various universities in Europe, the United States and Latin America.
Her latest books are Gore Capitalism (2018, MIT Press; Capitalismo Gore, Paidos 2016 and Melusina, Barcelona 2010) and Adrift's Book (Aristas Martínez, Badajoz, 2012).

Back to the conference in Mexico City