History teacher Gabi Teichert is looking for something. She sets out, spade in hand and begins to dig. Deeper and deeper she digs, determined to uncover German history at last. She is fed up with simply feeding her pupils German events in chronological order, from crusades to Stalingrad, as directed by the curriculum. “German history was so moving that it cannot be propagated in a positive sense,” in her opinion. She feels compelled to improve the basic material available for history classes, such as by exerting a direct influence on the spot at a SPD party conference. She is a practical person, curious and incredulous, looking for concrete evidence and not afraid of dirtying her hands during her private archeological digs, carrying out alchemistic experiments in her “witches kitchen” or using tools to attack fat volumes of history. The Patriot is the most perfect demonstration of master filmmaker Alexander Kluge’s theories and a film that totally refuses to bow to narrative cinema’s linearity and casualty, even refusing a stringent account of its contents. Instead, it presents different perspectives, attitudes, opinions and actions in order to encircle Kluge’s central theme: the development of a new awareness of history. (Marli Feldvoss/Daniel Eisenberg, CATE 2004) 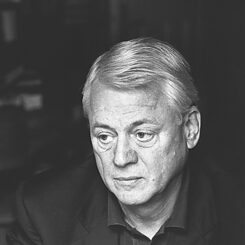 (c) Alexander Kluge Alexander Kluge, born in Halberstadt in 1932, received his doctorate in law in 1956 on "University Self-Administration," a subject that soon became politically explosive. He became a legal advisor to the Frankfurt Institute for Social Research and very soon became a confidant of T.W. Adorno. In the early 1960s, Kluge became known simultaneously as a writer and filmmaker: in 1962, he read from the volume Lebensläufe at Gruppe 47 and, together with 25 young filmmakers, published the Oberhausen Manifesto; in 1966, he became the first German after the war to receive the Silver Lion at the Venice Film Festival for Abschied von Gestern, starring Alexandra Kluge. This opens a door in Europe for the New German Cinema, of which Kluge may be called the spiritus rector, insofar as he uses all his strength to hold these individualists of cinema together and to establish institutional, financial safeguards for a German auteur film (founding of the Ulm Institute for Film Design in 1962, framework agreement film / television in 1974). As Kluge knows as a critical theorist, it is never just a matter of the success of individual works; what is needed is the creation of an authentic public, a stable connection with the audience, and individuals cannot do that alone.

Language: German with English subtitles
Price: Free and open to the public
info-chicago@goethe.de