Oppression, exclusion, physical and psychological violence: The women’s and gender projects of the Goethe-Institut Cairo counter them with education and empowerment in workshops for women and men. It is about raising awareness and about renegotiating the distribution of roles within a society.

Six hundred and seventy kilometres south of the Egyptian capital of Cairo, in the Governorate of Luxor, trainers Maha Khairallah and Hoda Kandil are working at multiple levels at once for the Goethe-Institut’s women’s and gender projects. They teach young women between the ages of 20 and 25 to be gender trainers, sensitise the public to gender issues, and include men in the process of raising gender awareness, as well. 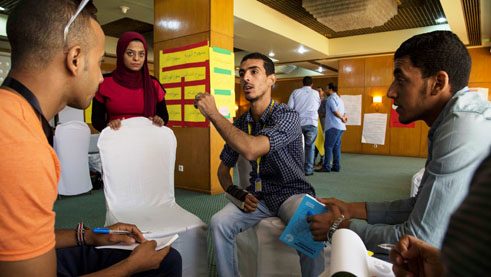 They conducted two workshops: one for women and one for men. “Ultimately, everyone benefits because gender is a human concept that includes both sexes equally,” says Hoda Kandil. Both trainings are part of the women’s and gender projects of the Goethe-Institut, which were initiated in 2012 to increase awareness of gender and are funded by the Federal Foreign Office. What’s new is the longer-term focus on a small target group in one city. The aim is to bring about structural change in Upper Egypt.

Kholoud Mohammed, one of the workshop participants, moved with her family from Cairo to Luxor ten years ago. Her work as a journalist has informed her about the oppression, exclusion, physical and psychological violence that women suffer from – especially in the villages and rural areas of Upper Egypt. “The majority of women in the villages cannot attend school. Also, female circumcision is still widespread, although it is prohibited by law,” she says. These must be opposed through education, encouragement and self-determination. “One of the main goals of the project is for women to master the transition from passive receivers to active broadcasters,” explains Maha Khairallah. “We give them the knowledge and skills they need to actively shape their society.” 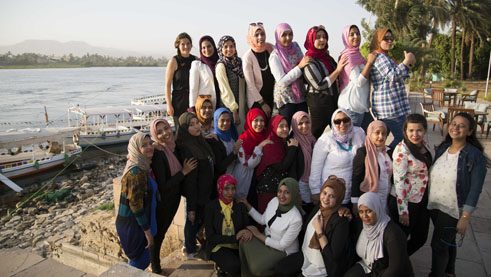 Mohammed Abd Al-Wassa is a lawyer for a human rights organisation. He also participated in a workshop. “Family, customs and traditions are sacred in Upper Egypt. Any attempt to change the roles of men and women in society is a threat to these sacred concepts,” he says. He emphasises that there are many problems in Upper Egypt, especially of economic, cultural, social and political natures. To bring about change here involves hard and continual work.

A start has been made. At the beginning of the training session, most participants agreed that it was a woman’s job to have and raise children while men go to work, provide for the family and taking care of the finances. However, a few workshop days and many discussions later, it was clear to them that these role assignments are social constructs that are variable. They can be changed...