Novosibirsk is the only city in Russia to show the Goethe-Institut’s interactive exhibition Games and Politics. Where cutting-edge Soviet scientific research once blossomed, is the seat of Russia’s leading game designers today.

Akademgorodok – the “Academic Town” – lies in the middle of a forest near the city of Novosibirsk. Founded sixty years ago as the Siberian branch of the Soviet Academy of Sciences, it soon became a centre of cutting-edge scientific research. Young researchers from all parts of the country came to Akademgorodok back then because they could earn well and do their research under ideal conditions. 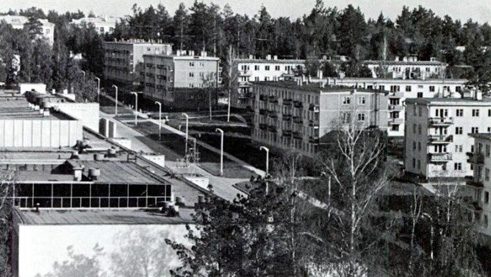 In the middle of the forest: Akademgorodok. | Photo: William R. Shelton, Science in Siberia

In addition to geology, the main focus of which was to develop and exploit Siberian mineral resources, nuclear physics, biology, mathematics and cybernetics were among the leading disciplines here – always connected to the “military-industrial complex” for, after all, they were in the middle of the Cold War. For some time, Akademgorodok must have been an idyllic place: far from Moscow, not only was focussed research possible, but in other areas of life an alternative atmosphere and a great deal of experimentation also prevailed.

The photos from the early 1960s of the student clubs, concerts and summer camps back when teaching was done outdoors, suggest associations with California universities or Black Mountain College. Akademgorodok continues to benefit from this positive image today even though it has long since been overtaken by reality. According to statistics, there are still dozens of research institutes that employ thousands of researchers, 7,000 of them programmers, yet the numbers of those who go abroad for their careers is probably even higher.

At sixty, the first computer games are about as old as Akademgorodok. The first computer graphics conference in the Soviet Union took place in 1977. This also began the gradual entry of computers and computer games into the lives of Soviet citizens. The engineers not longer played table tennis during their lunch break, but stayed in front of their screens and played that legendary game that we owe to Soviet programmer and designer Alexei Pashitnov: Tetris.

An 8-bit Sinclair home ZX Spectrum calculator that you could not only play but also program yourself was unaffordable to most people at the time. The most popular alternative made in Novosibirsk was the make “Sever,” or “North.” Also the popular science fiction game “Elite” from 1984, which combines business simulation with an armed space flight simulator, was further developed in 1993 by a Novosibirsk programmer. 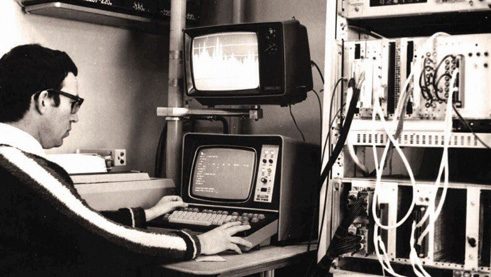 Programmer in Akademgorodok 1980. | Photo: sbras.ru With the technological advances in the next decade, the demands of gamers also grew. They impatiently waited for the latest games to be translated into Russian. This not only created entire professions; the black market and piracy flourished. In 1999, the game development company Alawar was founded in Akademgorodok, which, against all the trends of that time, relied on Russian game products and gradually won a place on the world market. Today, Alawar’s games are already being translated into 18 languages, sold in 50 countries and have reached over 1 million downloads. The headquarters is still located in Akademgorodok.

The transformation of Akademgorodok into a Russian IT stronghold, which earned the town the nickname “Silicon Taiga,” began in the early 2000s. Big companies began to crowd out the smaller game companies back then. Driven by the start-up idea, companies, independent experts and freelancers have to submit to the laws of the market and change their location if they want to survive on the world market, or at least the Russian market.

As in the real taiga, hunting is also common in the Silicon Taiga with its wealth of valuable technologies and species. Often domestic IT specialists get job offers in other Russian regions and abroad. However, some major companies also open their branches in Novosibirsk and create jobs for developers in Akademgorodok. 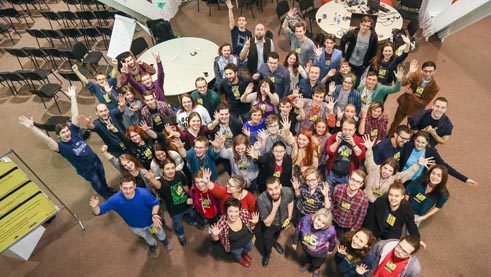 Participants in the game jam in Novosibirsk. | Photo: Alexej Zieler

In recent years, game designers have begun to communicate with one another offline, too, at conferences and workshops. This helps the young enthusiasts conquer places in the gaming paradise. Alongside the technologies and the industry itself, the spectrum continues to be further developed. Shooters or quest games are replaced by casuals, apps and, to the limitless joy of office workers, free-to-play games.

The exhibition „Games and Politics“ was held in San Francisco, Sao Paolo and Novosibirsk. | Photo: Sergey Mordwinow The games presented by the Goethe-Institut’s touring exhibition will presumably also determine the future of game designers in Silicon Taiga. Computer games live under their own laws and rules. For example, it is all the more interesting to observe how socially oriented games are able to engage users offline as well.