Hubert Fichte was a poet, ethnologist and early pioneer of new disciplines such as Queer and Postcolonial Studies. In the 1970s he travelled to several countries in South America, the Caribbean and Africa and wrote down his observations. As part of the project Hubert Fichte: Love and Ethnology by the Goethe-Institut, the exhibition Implosão: Trans(relacion)ando Hubert Fichte is showing artistic considerations of the author’s controversial topics in Rio de Janeiro.

The German free thinker Hubert Fichte travelled to Brazil three times between 1969 and 1982, experienced the country under the military regime and witnessed its censorship of the media and the arts in general. The exhibition Implosão: Trans(relacion)ando Hubert Fichte – an homage to the legacy of the bi-/homosexual, non-conformist, anarchic cult author – now comes to Rio de Janeiro under the protection of the constitution’s guaranteed freedom of expression. 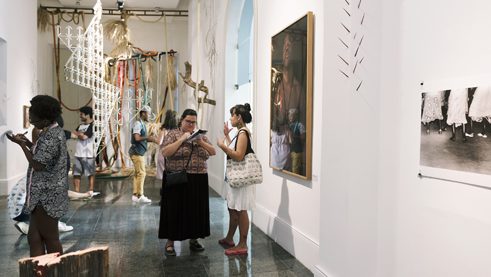 Yet here, too, caution was needed. Art in Brazil is experiencing a wave of conservatism in 2017, which has already led, for instance, to the closure of an exhibition in Porto Alegre, the prevention of performances and called into question the validity of renowned works shows in São Paulo.
The project was conceived by Anselm Franke and Diedrich Diederichsen and first initiated in Germany by Haus der Kulturen der Welt (HKW) in cooperation with the Goethe-Institut. The exhibition invited contemporary artists to create works that engage in dialogue with Hubert Fichte’s universe. The possibility (or the intention) of avoiding controversial topics that were important to the author did not exist.

Sex, the chronicle of metropolitan subcultures and visits to Afro-Brazilian places of worship and their priestesses are elements of the works of Ayrson Heraclito (Bahia), Coletivo Bonobando (Rio de Janeiro), Letícia Barreto (São Paulo), Michelle Mattiuzzi (Bahia), Negro Leo (Maranhão), the Pan African Space Station (South Africa) and Rodrigo Bueno (São Paulo). Works that deal with these themes more explicitly can be seen by persons aged 18 and older on the second floor of the Centro de Arte Municipal Hélio Oiticica. Salvador also appears in Fichte’s legacy in the form of the first book translated into Portuguese Explosion. Roman der Ethnologie.

In the works, Hubert Fichte’s conflicts are critically reflected in the Brazilian context. For example, in the performance by the Coletivo Bonobando, which consists mainly of Black performers, one of the actors approaches the audience as a “whitenographer,” a sort of researcher of whiteness. He asks bigoted questions that Blacks in Brazil usually hear, such as, “Have you ever used firearms?” or “Have you ever been stopped by the police before?” In the end, he makes the unusual request of measuring the brain of the white person.

Irony is one way that the artists chose to deal with extracts from Fichte’s work. They are parts that rub us the wrong way in today’s society, such as the over-sexualisation of the Black body or his betrayal of the concept of the speaker’s perspective, according to which individuals who are discriminated against speak for themselves as the protagonists of their own struggle.

Emphasising this question, the confrontation between Fichte and the ethnologist Pierre Verger (as described in Explosion. Roman der Ethnologie) is staged in an installation by two Black actors, who whiten their faces based on and as an inversion of “blackface.”

The “trans” in the show’s title ultimately is an element of all the works, but it refers to reflection and transition. Fichte’s “experimental ethnography” reaches Brazil as a possibility for analysis and resignification through our own multi-layered culture.