Laura Klatt, born 1984, lives in Berlin. Following her training as a youth worker and educator and after a sustained period in Mexico, she started working for the GRIPS Theater, where she was employed from 2009 until 2015. Her work consisted of overseeing the GRIPS' productions as well as developing plays with teenagers and doing after-school work related to theatre with teenagers and adolescents. The inter-disciplinary theatre project “Schatzsuche” (treasure hunt), which she co-developed and implemented, was awarded the 2011 “Kinder zum Olymp” prize. 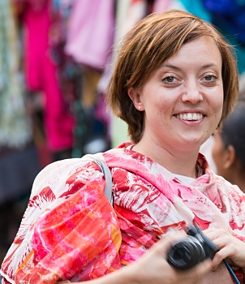 © Sarah Klare
As part of her work, she also created and developed the open stage format BONUSTRACK, which allows professionals and teenagers to meet within a distinctive and open space. Through co-operative projects like “kulturhappen” she enabled groups like SLOW FOOD YOUTH to collaborate closely with theatres.

Laura Klatt was part of the creative team of the renowned “berliner kindertheaterpreis, 2015”, a prize awarded by GRIPS and GASAG. She also helped build up the campaign MY RIGHT IS YOUR RIGHT, through which Berlin cultural institutions support non-citizens with their political agendas.

While working at GRIPS, Laura Klatt also studied cultural and media management at the University of Music and Theatre Hamburg. In her BA thesis (“Why is there no obligatory theatre visit? If everyone goes to the theatre, things will change!”), as well as in her work in general, her focus lies on the question of how people can be brought closer to theatre and in which ways they use and enjoy it. She understands theatre as a public space, in which a heightened awareness is created through seeing plays and through being on stage.

Since 2009, she has facilitated various workshops with authors as part of the “International Literature Festival Berlin” and the “Poesiefestival”.

In 2015, Laura Klatt received a scholarship for the International Forum, which is part of the Theatertreffen. In the same year, she became self-employed with the artists' collective Mixed Pickles. Mixed Pickles is focused on the production of documentary films, the development of multi-disciplinary formats and the organisation of events supporting inter-cultural dialogue. Mixed Pickles offers space for encounters between different people and disciplines. It is a place for research, experiments, trial and error, and utopias, as well as hard facts and images. It focuses on the here and now, without neglecting the consequences of our actions. What is possible results from the people who gather. Through revealing grey areas and inspecting the apparently routine, things that are often overlooked are exposed and become  the centre of attention. Further, it is an attempt to deconstruct the mechanisms of prejudice, as well as breaking up stereotypes, so that people can be shown in their full spectrum. It is about risk and critical perspectives without moralising or being destructive. To celebrate the unique as well as the diverse is Laura Klatt's and Mixed Pickles' motivation.

Laura Klatt @ Sandbox (Apr. 2016)
Two and half months in Bangalore

I had no idea what to expect in India, still I took the decision not to get too much information, not to read all the travel guides nor to watch all the movies about India. I wanted to see what this foreign country will trigger in me and especially the city which was to be my hometown for two month and half months. 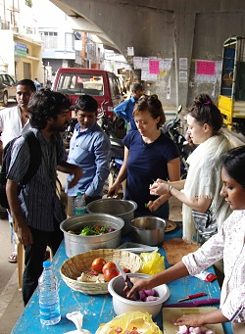 © Charlotte von Thaden I lived for a long time in Latin America and the metropolis Mexico City was my home for long. This is the reason why I wasn't worried about living in a city with nine million inhabitants. But apart from my experience in other countries - I didn't have any feeling for India.
Even though I tried not to get too much information about India, I received a lot of facts about the country even without asking. It seemed like a lot of people thought they had to warn me and give me a lot of suggestions, what I had to eat and what I had to see… It seems India produces strong emotions good and bad…

But still I didn't get a real connection to India before I left. But I must admit, even after having been to India, I still don't know the country. I know some parts of Bangalore - but that doesn't mean I know or understand India. The country is so big and there are so many people…

When I arrived in Bangalore I had two impressions: some things feel familiar in some ways and the other one - I never saw something like this before. Still I can't really explain what defines these two aspects. For sure it’s the advanced technology / technological progress - except the internet that constantly breaks down – on one hand and on the other the poverty and rural life. You'll find bars and restaurants on the rooftops of the city  similar to those in cities like Berlin and in contrast you'll see people living on the streets surrounded by piles of garbage. 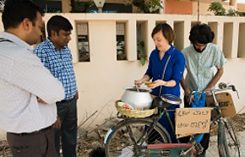 © Sarah Klare For sure a lot of people will think now “Yeah, that’s India, a developing country. What else did she expect?’’ - Nothing. I could just handle things and situations I came across, and there were a lot of new things. Before my arrival in Bangalore I decided with my hosts - the Sandbox Collective - that we would figure out, what to do after I arrived. This decision was really good for me because I could react to the emotions and thoughts which emerged. The Goethe-Institut programme offers the freedom to decide what you want to produce and present while you're there and I think that's really important in a city like Bangalore. Because the city does something to you where you have to react, and I think it's good if that is reflected in the work you produce.

It's not a city which offers a lot of cultural events, exhibitions, concerts or opera and theatre. But then, there are lot of amazing people who build up the cultural landscape. Still, in a city which grows so fast in the IT world – these people make up only a small group.
The problems you face are more in daily life than at events. I was really impressed. How to find your place in a city which doesn't offer public spaces, which is bustling all the time and where people are just running from work to home and back to work. For these "journeys" around the city you waste a lot of time and all the time you´re surrounded by the crazy sounds and smells. 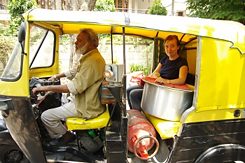 © Sarah Klare My stay in Bangalore was an inspiring time especially from the viewpoint of understanding a city. I was on rooftops to get a better perspective, which reminds me of an overflowing creature in which I could get lost. I recorded the sounds of the streets at different times of the day, I closed my eyes and absorbed the smell of the city to capture the ingredients of the city.

But the most important thing while I was in Bangalore and to understand the city at least a little bit was to meet the people who are living here and characterising the city. I went out on a bike to exchange potato salad for stories. I also created a table society with strangers for one night, I opened, along with other artists of the residency programme a "pop-up" restaurant under a flyover where the people narrated or drew their stories while we ate.

I walked with people in their neighbourhoods to hear personal anecdotes of corners, public spaces, houses. Gradually we created a map of Bangalore with personal stories. The people were really helpful and gentle, they answered all my questions, doubts - my angry "whys" and happy "wows“ became space to discuss. 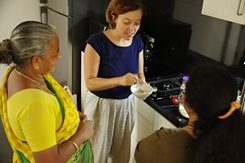 © Sarah Klare
For me Bangalore is a city that is lagging behind it's own pace, which seems to be under shock because of development that maybe went too fast, impressive people who try to sow something stable and peaceful and create spaces where something creative can blossom. These people form the city for me and they touched me deeply with their work and passion. I recommend that everyone travel to this city not just for holidays but rather to meet these guys, Nimi and Shiva from Sandbox Collective, the people from Jagaa, One Shanthi Road, collectives like Forager.

© Charlotte von Thaden All these people and a lot more - I didn't name here but who also do a great job - aren't against the development which happens, they create spaces where "something else“ can arise, they give "other" thoughts and ideas a platform to grow.

I also thank the Goethe-Institut, which has amazing staff. The Institute was an important place to go and their vast stock of ideas and suggestions gave me the impetus to plunge into this city, and anytime when I needed a breather they waited with a schnitzel at Café Max.