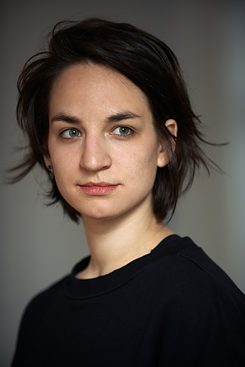 © Martina Thalhofer Annelie Andre, born 1993 in Salzburg (A), graduated with an MA in choreography from HZT Berlin (Inter-University Center for Dance) in 2018 with her full-length piece “Laws of Power”. She has studied Contemporary Dance Education at the Music and Dance University of the city of Vienna (MUK) and worked as performer and choreographer on  collaborative projects as well as for solo-works, e.g. at the Imagetanz festival (Vienna) with her solo performance “SYS4” and at the opening of the Volksbühne Berlin with Boris Charmatz. She gives classes and workshops in contemporary dance, improvisation and composition in Berlin, Vienna and Salzburg and worked as choreographer at Volksbühne Berlin (Moby Dick, 2019, directed by Anita Vulesica) and for the Seneca educational programme Berlin. She has also been working as a musician with loop station, hang, piano and voice in various contexts. A few of her texts were published in anthologies.

In 2019 she got funding from the Berlin Senate for her upcoming solo project “META” and has been selected for the Residency Programme Schloss Bröllin 2019.

As an artist, her special interest focuses on the interdisciplinary relationship between dance, text, space and sound, as well as on the transformation of theatre and performance space into a complex place of experience.

In the framework of the bangaloREsidency she plans to continue her choreographic research on power relations and hierarchy with local dancers from the Shoonya Centre for Art and Somatic Practices and interested artists from different fields.

Annelie Andre @ Shoonya (July - Aug. 2019)
When I arrived in Bangalore, I only had a rough plan of what was going to happen. I wanted to perceive what lay in front of me with an open mind, to dive into everything new as it unfolded. My aim was to accept a situation without controlling it, while working with what I had available to create something new. Throughout the first week we were introduced to inspiring places and people in Bangalore. This allowed us to perceive the city as it is before diving into our individual artistic processes. 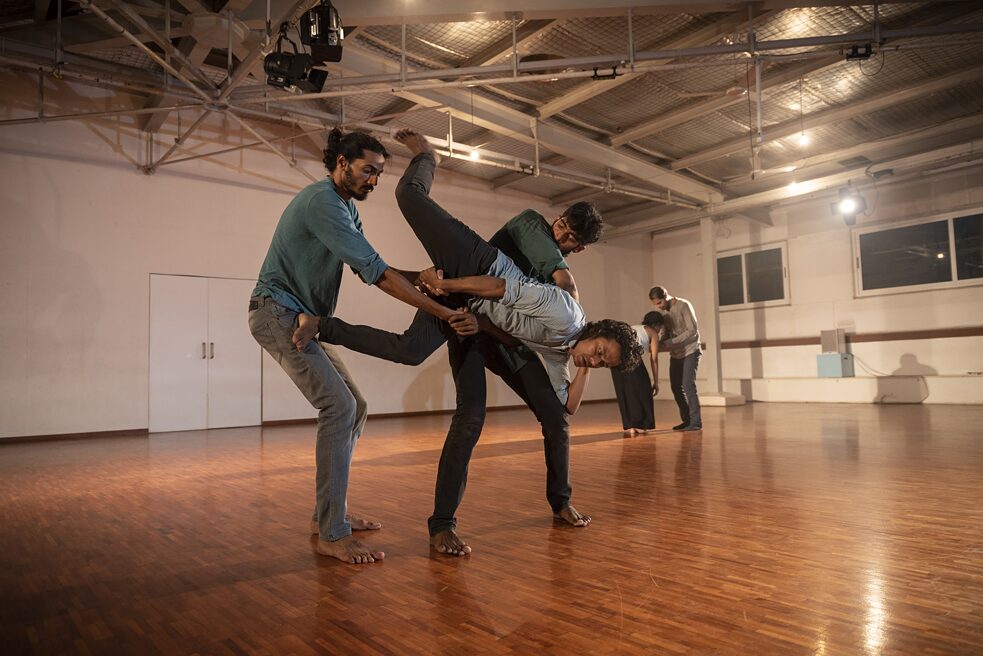 Photo: Sandeep TK © Goethe-Institut / Max Mueller Bhavan Although the environment is rather different from what I am used to, I did not have a strong feeling of a "culture clash". I genuinely felt comfortable and warmly welcomed by my hosts Shoonya Centre for Art and Somatic Practices. The team of the Goethe-Insitut Bangalore as well, was always very supportive.

By creating a short video with the title “Plants#1”, I started to work in an intuitive manner. The video shows me performing with plants in a studio. It felt like the right way to get ready for creating new ideas, opening up and connecting with my own creativity.

Throughout the second week of my stay in Bangalore, I met with local dancers that took part in my main project, the Bangalore Power Project. We connected through working on ideas on the topic of power mechanisms. Starting off with considering our personal experiences, we used improvisation to create movement material. I later wrote several topic related texts to use as a foundation for creating both solos and duets. In the last stage of this creation process, I tried to make the individual parts dramaturgically work together in order to make sense of the idea as a whole. 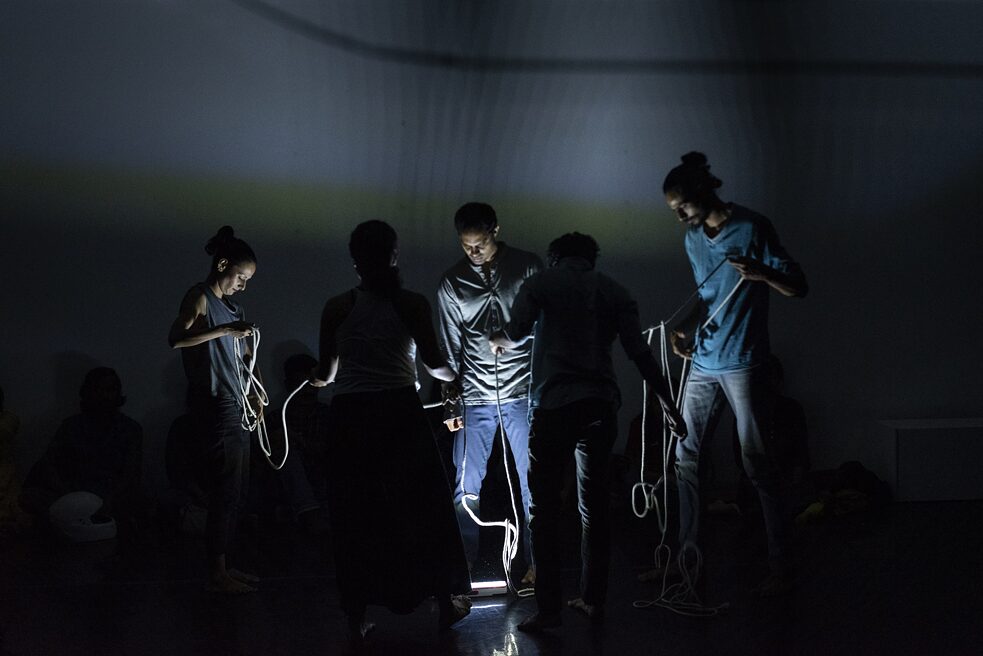 Photo: Sandeep TK © Goethe-Institut / Max Mueller Bhavan I really enjoyed working with the group. Nevertheless, I often felt confronted with the meaning inherent in being a young, white, European female in the context of coming to India to work on the topic of power mechanisms. I then asked myself, what my position was in this whole process. I wondered what my privilege of having this opportunity meant and how my aim for collectivity and a non-hierarchical collaboration could be reflected in the process itself.

I soon discovered that working with the human body itself acts as a connecting mechanism, independent of our origin. This lead me to focus on ideas of how we can offer support to each other by thinking of what we have in common rather than searching for differences. Thinking about it now, I strongly believe that this would act as a powerful strategy in dealing with difficult political situations.

Since all the participating dancers had jobs outside of my production, one of my major challenges was scheduling rehearsals. This in turn created a fragmented working process. Focusing and elaborating of certain topics and questions was hard as the constellation of people present kept changing. The first rehearsal where everyone involved in the project was present, took place just two weeks before the show.

Lighting, sound and some choreographic elements were only set up at the very last minute, which itself was rather challenging and stressful. Everything fell into place however when it had to and I was amazed by what we had managed to develop as a team in such a short time. I saw highly honest performers on stage. They connected extremely well both with each other and with the audience, which I felt very touched by. 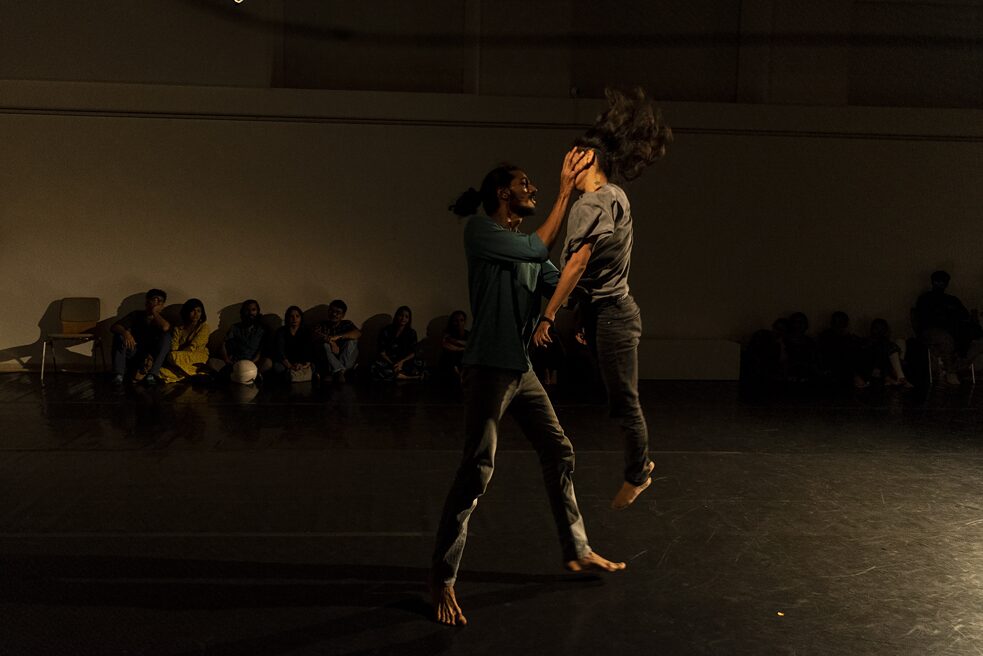 Photo: Sandeep TK © Goethe-Institut / Max Mueller Bhavan Prior to presenting SHAK | WE I showed the short solo performance META (IN) fused, that is based on my performance piece META that premiered in Berlin in June 2019. In META (IN) fused I explored how existing movement material is transformed by new experiences. Through this, I analysed my newly acquired personal and artistic knowledge by being set in the environment of Bangalore. By residing in the city of Bangalore with all its many impressions such as its traffic, its inherent noise as well as its multilayered identity, I felt the urge of clearing my head of everything unnecessary. I wanted to establish a basic and pure setting, in which neither objects nor fixed phrases exist, but where I perceive the moment for what it is and connect with the audience by expressing myself through body movement, light and voice/text.

After my first show in Shoonya, I went on a short three-day trip to Hampi. I was both impressed and inspired by the extraordinary landscapes of this astonishing place with all its many ruins and ancient temples. Not only did I have the opportunity to visit this beautiful site, but I also took the opportunity to create video material in this unique setting. 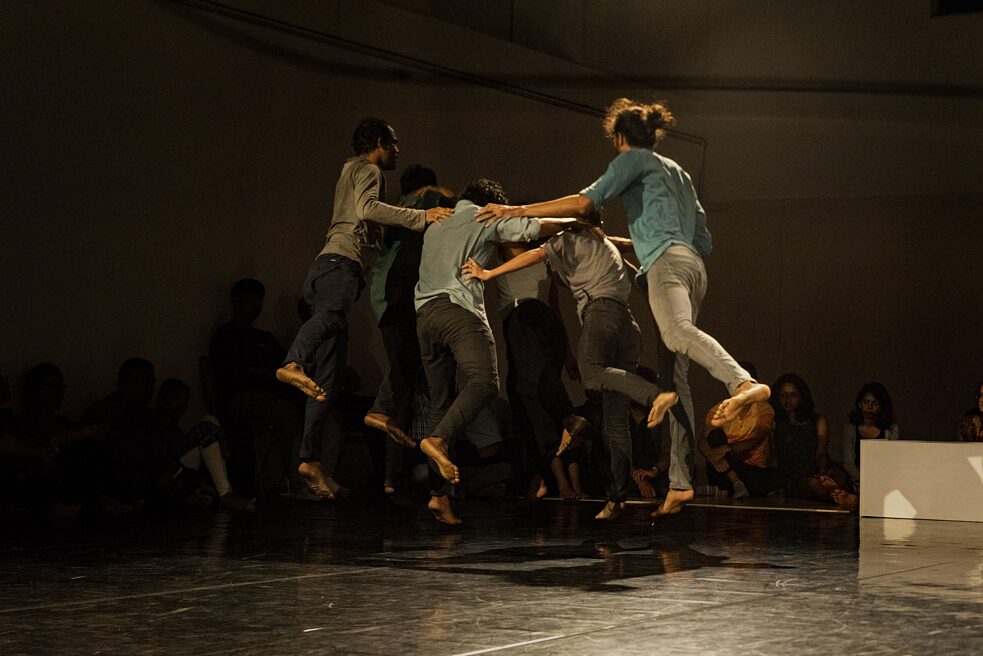 Photo: Sandeep TK © Goethe-Institut / Max Mueller Bhavan On my very last day in Bangalore and right before going to the airport, we had our second show at the Goethe-Institut /Max Mueller Bhavan. Having the opportunity to perform in two different locations was great, since the audiences were as different from each other as both locations themselves. In general, the audience was very interested and open minded and I was happy to be approached with questions about our creation process and related topics. I have this feeling of gratitude when we, as performers and creators, achieve success through initiating a discussion about art or even facilitate a space for dialogue.

Being back in Germany and evaluating the experiences I have gained in India, I strongly feel that the residency was not only successful and productive, but also special in many different ways. I had never been to a place as full of contrasts as Bangalore: the next-door existence of slums and high-tech, the slow and the rushed, the lively and the lethargic. All these many aspects co-exist in this city that is so diverse and complex. 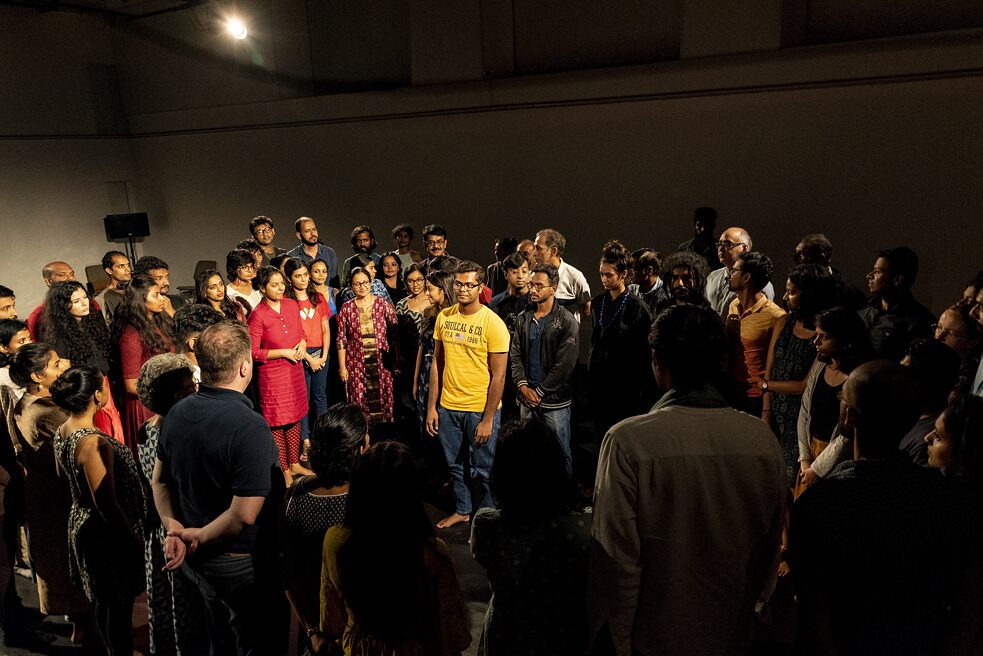 Photo: Sandeep TK © Goethe-Institut / Max Mueller Bhavan I have experienced that I am able to adapt rather quickly to what I perceive as unfamiliar. Independent of whether it is living or working in a new environment, I find joy in exploring the process of getting through a struggle by facing the unknown and the unpredictable. Bangalore is loud, smog and chaos are always present. But it is also a home to the many inspiring individuals that I have met throughout my seven-week journey and it also became a home for me. Today, I hope to be able to, at some point, continue with this project. I imagine going back to India to find different locations to share our performance or initiate an exchange with my German team. For now, this colourful memory will live on in the bodies and minds of those that took part.

I am deeply grateful for having been able to gain these experiences that widen my horizon and have great meaning for my personal and artistic development.