Reviving a dying craft:
George Demir, who is a media artist, has selected the unique tradition of Channapatna’s wooden toys as an artistic means to explore and survey a contemporary and pluralistic representation of India today.

George Demir has been studying at the Academy of Media Arts Cologne since 2013.  In 2017 he was awarded the scholarship of the Studienstiftung des Deutschen Volkes and also works as undergraduate assistant to the Chair of Media Art/Transmedia Spaces by artists Ute Hörner and Mathias Antlfinger (since 2016). 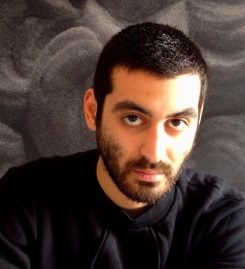 © George Demir In 2014, George Demir co-founded the “Berlin Istanbul Quartier”; an artist-run platform designed for international and intercultural exchange, putting together exhibitions and a variety of educational programmes and participating at the international art fair Contemporary Istanbul in the two subsequent years. Furthermore he was artist-in-residence at the Kolleg für Musik und Kunst in Monepulciano, Italy, where he produced two projects (“Göçmenler” and “dritter Gesang Vers 1-9”) under the mentorship of the artist Susanna Schönberg.

He completed his pre-diploma in 2015 on “The becoming visible of subaltern through engaged artistic practices”, focussing on the social transformation of the burakumin in Japan. Creating a kimono in traditional presentation, he refers to the grouping through woodcuts and paintings used in the print. His artistic and visual studies project “Iconoclasm” (2015-ongoing) contrasts two forms of iconoclasm: the wilful destruction and motivated by adoration or superstition. In 2014, the artist started working on his project “Göçmenler” (Turk. migrants or wanderer) examining the spatial as well as transnational migration of images. The starting point was a graffiti of an Islamic-connoted tile, which crossed national, institutional and social borders while continuously transforming its form.

His artistic emphasis is set on research-based media art with an interdisciplinary approach to a variety of art forms. He examines essential politico-social matters by referencing international visual as well as cultural iconography to convey his stance. Though historical references seem to be omnipresent, he rather uses them as examples to contrast them with present and future precedents.

During the bangaloREsidency, George Demir will conduct interviews with some of the city’s inhabitants in order to survey a contemporary and pluralistic representation of India today. Tension will arise because on the one hand there are infinite possible ways of representation, while on the other­ – so goes the assumption – common forms of representation will be resorted to, following from which habitual aspects of the contemporary society will surface. On the basis of these interviews, this group of people will then be recreated in the tradition of Channapatna’s wooden toys, which almost exclusively depict historic representations and Hindu deities.

George Demir@1ShanthiRoad (Sep.2017)
„When the world ends I’ll come to 1ShanthiRoad with my family.“

Very early on Suresh quoted a former bangaloREsident telling him that if the world ended, he’d bring his family and come to 1 Shanthi Road ­– and I completely relate to that idea.

Suresh Jayaram, Ashok Vish and Sandeep TK are the heart and soul of 1 Shanthi Road and made my entire stay the amazing experience it was. Sitting at the table in the courtyard, with different people, almost everyday, became such an important part of my routine whether it was talking about art, working on individual projects, partying excessively, playing card games or discussing the cultural importance of Drag by re-watching and dissecting seasons of “RuPaul’s Drag Race”, this table felt like an oasis within this paradise called 1 Shanthi Road.

1 Shanthi Road is a safe haven for people from all walks of life. In the months I stayed at this amazing space, I was able to meet some of the most amazing people. The fluctuation of artists just coming in, arriving to live there and leaving again after one month or two or just a few days creates this uniquely productive whirlwind.

While I expected a lot of different things from the bangaloREsidency, I couldn’t even have imagined finding another family – but I most certainly did.

1 Shanthi Road wasn’t only home for two months, it will be home forever.