From early on, Eduardo's understanding of architecture has been inspired by his interest in the arts. In his work he blends elements of architecture, design and performance, creating interactive situations that challenge the relationships between people and space. Drawing on temporary architecture, exhibition design, installation, illustration and scenography, he is constantly searching for new opportunities to further explore the roles that art can play in different contexts. Eduardo's creations take the shape of living platforms which invite people to take part, explore and play, questioning ideas of the traditional gallery or museum space. The result is a scenographic body of work where fiction and reality converge and people are driven to think and move beyond their daily habits.

For the project Casa do Vapor, Eduardo was involved in the design of a temporary community house, situated in Cova do Vapor, a small fishermen settlement on the river Tejo estuary near Lisbon. It was built collaboratively with the inhabitants of Cova do Vapor and a group of young Portuguese and internationals. For the space of six months, from April to October 2013, the Casa was conceived as a meeting point for people with varied backgrounds and knowledge. As a local hub it served as a political forum and place for critical dialogue about the ongoing territorial development, offered space for various workshops about local knowledge, a self initiated public library and the “cozinha do vapor”, a popular kitchen project. The activities were all co-ordinated by the citizens of Cova do Vapor and the international residents. 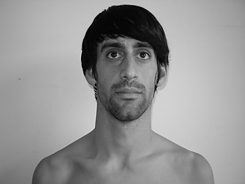 Nebulosa was a collaborative in situ performance staged in old ruins in the North Portuguese mountains. Conceived as a loose series of events, the performers were asked to respond to the space and the events. In the ensuing performance, their play, their bodies and the landscape blended into one another, transforming the environment into something new. Nebulosa can be seen as a space experiment, a game with light, a body challenge, using a given location to create an original piece of art.

In Bangalore, Eduardo will collaborate with Sandbox Collective to realise two main works, the Portable Museum and The Generator. Both concepts aim to break down boundaries between the artist and the spectator, the exhibition space or stage and our everyday environment.

The Portable Museum relates to André Malraux "imaginary museum", as well as to the original form of the museum, the "cabinet de curiosité". It is conceived as a movable exhibition space that opens itself to the streets of Bangalore, curated by the inhabitants of the city. Each participant is asked to give or create an object piece for the museum, which represents their individual experience of urban life. In combination with the objects of other participants, a unique, locally generated and diverse image of Bangalore will be created, showing hidden aspects of Bangalore's complex character.

The Generator is a one-man performance theatre, which works with the idea of portable "prostheses“ for public space, fixed spatial corrections that temporarily change our known environment. With the help of The Generator the body of one actor will transform into an object that enters everyday places. By disrupting and altering familiar spaces and settled habits, an atmosphere of communication and exchange is instigated. Using the concept of the "open end game" by Friedrich Fröbel, German creator of the kindergarten, younger spectators will also be encouraged to engage in this spectacle that blurs the lines between dream and reality, the everyday and the stage.