Kris Merken studied  at the Department of Applied Theatre Studies at Justus Liebig University of Gießen; received his diploma in 2010 with a thesis on the concept of "Dilettantism“ in Weimar classicism. Equipped with critical theory and very much interested in curational and artistic practices, he started working as assistant for Heike Albrecht, Artistic Director of Sophiensaele, Berlin. Later he assisted Tim Etchells (Forced Entertainment) and Boris Buden (European Institute For Progressive Politics). He amplified his technical skills as technical assistant and video operator for theatre companies such as Rimini Protokoll and Monster Truck. 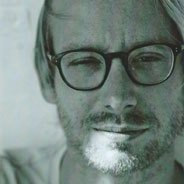 © Lisa Deniz-Preugschat renowned director Boris Nikitin in F for Fake (2010) and Universal Export (2011). Continued to explore the interstice between artistic and scientific practice in collaboration with musical theatre group Capri Connection in Tristan oder Isolde (2013) and Schweigen im Walde (2014). In connection with the 100th anniversary of Dada Zürich they invited artists, musicians and activists to collaborate in a post-humanistic honky-tonk theatre series, dealing with all sorts of waste and junkware. Die Große Bunte Bunny Schau was shown at the Züricher Festspiele 2016.

He also works together with Swiss director Corinne Maier in a long-time collaboration since 2011, when they first developed Selberdenken Setzen!, a lecture performance on Hannah Arendts political theory. Coming from there, they elaborated on the dissolution of the difference between the private and the politcal and developed an autobiographical form of theatre in Past is Present (2012), Like a Prayer (2014) and Myself (2016).

Last year he collaborated with Khoj International Artists Association and well known director Zuleikha Chaudari, internationally noted artist Mithu Sen and young filmmaker and activist Shilpi Gulati in The Mrcchakatika Project, where they presented an Ambedkarite "caste reading“ of Shudrakas Play. Since then his interest in Ambedar and Dalit culture only grew.

During the bangaloREsidency he will collaborate with the actress and singer Kirtana Kumar and the musician Konarak Reddy of Infinite Souls to work on a project about Namdeo Dhasal, another prominent voice of the Dalit Movement. Focusing on his electrifying poetry they will experiment with voice, jazz improvisation and documentary material in order to create a performance that highlights the human yearning for freedom.