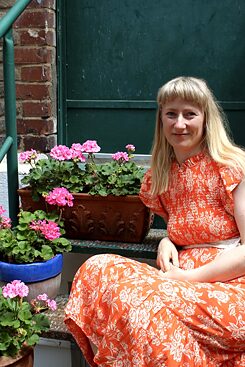 © Sarah Hale The work of Line Krom, a visual artist based in Frankfurt/Main, explores the precarious working conditions in the art world. Trained as a cultural anthropologist Krom uses artistic methods to explore the circumstances under which art is created. Her projects take the form of drawings, objects, installations, texts, performances and participatory situations.

A major focus during her bangaloREsidency explores the exclusion strategies governing the Archive of National Centre for Biological Sciences (NCBS). What goes in the NCBS Archive and what doesn’t?  Who can and must write the history of science through the NCBS archive? The bangaloREsidency enables Krom to reflect critically about the archive’s excessive materials and debris, for instance the archive’s dust. Dust that is produced in archives is regularly removed.

Krom has been working with dust from collections and museums for several years. In her exhibition „Cleaning and other things done for pleasure“ at Kunstverein Nachtspeicher 23 in Hamburg (2019), particles of dust, coffee grounds, and saw dust from various art associations throughout Europe were used to create a dust painting. Among others from the exhibition hall Port 25, Mannheim, the project space |Meter|, Copenhagen and Konsthall C, Stockholm, who donated their waste.

Symbolising economic conjure and value-creation compulsions, dust represents a creative element for Krom, as it multiplies without further intervention. The NCBs archive provides a ready-made framework for the next phase of Line Krom’s phyto-mining work, „Dust2Gold“, using plants as non-human collaborators to mine metals from dust and debris. 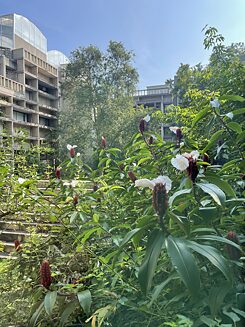 © Line Krom Dust and Debris in the Archives at NCBS

During my artist residency, I have often been asked how I came to work with dust as an artistic medium. The reasons are complex, so I usually mention the simplest answer: I get the material for free. Then I go on to give a brief outline of the economic reasons: poor pay in the art business. My short answer satisfies most people’s curiosity. But not all reasons are routed in this business-like attitude.

As a visual artist I am interested in what I see, the nature of a material I can work with, and also the potential of what a material could mean for me, material as a metaphor. For some time I have been collecting dust from museums. I process this dust into pigments and paint with them. The idea behind this is to make a kind of Pantone colour palette of different museums. The colours of the dust differ from each other. So it quickly becomes clear that the museums and also individual rooms have different colour codes. Like a fingerprint of the architecture and the people who spend time there.

But dust is more than the material itself. It is a metaphor for the everyday, the commonplace (German: gemein), and for all sorts of ideas associated with the dirt that accumulates in everyday life. Dirt, both the common and the nasty (German: das All-gemeine und die Gemein-heit), is what one prefers to sweep under the carpet in order to hide it from the eyes of others. The perspective from which I speak is strongly related to my being German as is my research. But, this cultural close-up also reveals certain universal constants such as an aversion of dirt, psychological manifestations centering around dirt and irrational justifications for social exclusion - in Germany and how I encountered it in discussions during my residency, also in India.

Everyday life at NCBS
For my residency I stayed at the National Centre for Biological Sciences (NCBS). On the campus of NCBS, it becomes clear at first glance: cleanliness and order are core elements. There is stark contrast between the campus and the urban metropolis of Bangalore with its millions of inhabitants. Visitors who enter the campus describe their experience as akin to entering an oasis. A place where they can literally take a deep breath. This contrast shows that the environment at NCBS is not natural, although it seems to be natural. 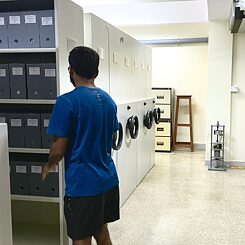 © Line Krom Cleanliness more than just hygiene protocols - cleanliness as a symbol
The NCBS is a scientific institution and at the same time a gated community. It is enclosed by a wall and numerous guards who are active around the clock. Access is only granted to staff or visitors after prior registration. Thus, access to the area is regulated and relatively little interaction with the outside world takes place.

The Archives at NCBS
During my residency I learnt that the archivist’s worry is stasis. He is constantly worried that valuable documents and objects might be forgotten. He who rests rusts, or in other words, dust settles on everything that is not used regularly. In the archives it seems that everything always has to be in motion - one of the first things that catches my eye on my first visit around the archive is the air conditioning. There are two air- conditioning units in the depot itself, which alternately air-condition the room from different sides by circulating the air in the room, thus preventing mould growth in the tropical climate. The air-conditioning system is connected to the maintenance team, so if there is a malfunction, it must be repaired within a short period of time.

To find dust, these unknown islands of oblivion, in the Archives at NCBS requires a lot of sleuthing. And yes, they do exist, the marginal zones, the liminal spaces, the architectural blind spots. There are supply shafts, sticky patches where ants or small lizards have breathed their final breath. Archive boxes in which a little decaying cellulose settles on the bottom. Even the fly drawings from K. S. Krishnan’s Office collection hanging on the wall are not safe from me trying to find dust. I find a few spider webs there. But eventually my haul is not worth mentioning, so little is it. This confirms the prophecy of my colleagues who, with a smile on their lips, suggest I look for Hypnos, the Greek god of sleep and forgetfulness, in other archives. 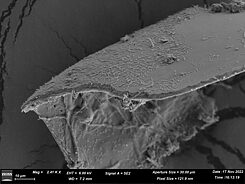 Exceptions confirm the rule - not every place is guarded against intruders
The doors to the individual buildings are open. The buildings themselves invite a striking display of nature, numerous openings, patios and atriums. Not only do they invite people to indulge in the play between indoors and outdoors, but numerous animals also feel at home on the campus. This has to do with the immediate vicinity to the agricultural campus of GVKV, some undeveloped open spaces and a small jungle bordering the campus of the NCBS. There is also a warning sign here that there have been increased snake sightings. A striking feature is the large number of different birds, bats, dragonflies, lizards and toads that repeatedly stray into the buildings. Of course, there are also cultural followers such as pigeons, mice, rats - and stray cats that are not fed directly, but feed themselves on the leftovers in the canteen in the evening. They also bring their offspring into the buildings, as they are warmer there, especially at night.

© Line Krom The Archive - a dust free zone, yet a post-human archive!
During my residency at NCBS, I learned that the term culture not only describes human coexistence, but can also be applied to bacteria. By extending the concept of culture to non-human life, new questions sprouted in me. What if the archive itself is used by different users, or serves them as a habitat? What could grow out of the discarded material of the archives, the dust and debris? In brief, a change of perspective on the More-than-Human Archive had made me curious. With this in mind, I explored two routes, that of the More-than-Human living entity, and the More-than-Human of inanimate objects.

The archive as a living habitat
My bacterial cultures come from the archives. I found them on objects of everyday use, especially the entrance door. Contemporary cultures so to speak. But I also collected from memorabilia, artefacts from the collection “Artefacts Obaid Siddiqi”. The background for this was the consideration that the traces we leave behind in a place outlast our presence there.

The sustainable archive
In collaboration with Aditi Mishra we created a paper charger for harvesting sustainable energy from the archives. During my residency, I had access to various areas of the archives at NCBS and the campus. In the archives, I worked with the public area and the depot alike. Working closely with the team of staff, visiting scholars, and visiting artists, I was able to get different perspectives on working in the archives. Further the NCBS campus was also open to me. I was able to follow the daily routine of maintenance work (Facility Management, Canteen), get to know areas where research assistants work (Fly Kitchen) and had scientists assisting me with my dust experiments in the labs. 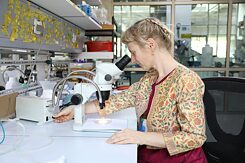 © Line Krom Within a very short time, I was confronted with a multitude of new experiences which I put together in my workbook Dust and Debris in the Archives - A Working Journal. It is an artist’s book with original materials collected in the archives. Due to the fact that my workbook is an artist’s book assembled by hand it exists in a limited edition of 80 copies only - one copy sitting on the shelves of the Archives at NCBS, another copy can be found at Goethe-Institut / Max Mueller Bhavan Bangalore and at Basis e.V. Frankfurt.

The material I collected during my stay at NCBS will have to be further sorted out and evaluated once I get home. I would like to thank the Archives at NCBS, Venkat Srinivasan and Ravi Kumar Boyapati for their unconditional support of all my ideas. Further I would like to thank the Goethe-Institut / Max Mueller Bhavan, namely Michael Heinst, Maureen Gonsalves and Riya Matthew and Basis e.V. for making enabling me to write a new chapter in my research on dust.