Magdalena Emmerig, born in 1988, studied stage and costume design at the Kunsthochschule Berlin Weißensee and lives in Berlin. 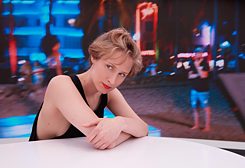 In 2015, Magdalena Emmerig and Yana Thönnes founded together with Belle Santos and Rahel Spöhrer the performance company THE AGENCY which experiments in an immersive way with the manifestations of neoliberalism.

Their performances, in which viewers are gently involved as customers or future members, revolve around subversive options of agency under the conditions of the post-digital: How are our desires, our feelings, our identities and political movements formed in the post-digital age? And how is it possible under these conditions to create counter-emotions, counter-identities, counter-movements? The artistic works take on neoliberal connotations of formats (such as coaching) and their aesthetic strategies such as branding and corporate identity, overturn the institutionalised technologies of the self in a critically affirmative way - and struggle for a utopian potential from a queer-feminist perspective.

Currently, THE AGENCY is working on the development of their work series Neue Männer * Bewegung, in which they investigate the connections between patriarchal masculinity and far right thinking to create a countermovement.

During the bangaloREsidency at Sandbox Magdalena and Yana will do research for an upcoming work of The Agency. They are interested in surrogacy as a phenomenon that on the one hand enables queer family planning and on the other hand reenforces global hierarchies. They are interested in the history as well as the current situation of commercial surrogacy in India, whose little regulated legal situation made the country one of the leading providers of all kinds of fertility services for an international market from 2002 to 2015. They also examine the Western view of India with regard to spiritual tourism, which has
always shaped the relationship between Germany and India.

The Agency @ Sandbox Collective (Oct. - Dec. 2019)
In our bangaloREsidency at Sandbox Collective we explored the issues of commercial surrogacy and spiritual tourism from a Western perspective. For us, the interest in surrogacy began with reading Margaret Atwood's novel "Handmaid's Tale" - how fitting that the second part of the story about Gilead was published shortly before our flight to Bangalore and is currently available in all bookstores. Two days after the premiere of our play "Take it like a Man" in Düsseldorf, we arrive in Bangalore at 2.00 a.m. at the Sandbox office, which will be our home for the next six weeks.

After the orientation week, during which the Goethe-Institut provides us and the other residents with initial insights and contacts in Bangalore, we will begin our research. We know that surrogate motherhood in India has been increasingly restricted by law in recent years, to what extent is still very unclear to us, so we are all the more surprised to see how many "fertility clinics" we get to see while driving through the city. So we decide to visit one of the biggest clinics in the city: Cloudnine fertility, which advertise with the slogan "happy mothers, happy babies" and also offer gestational surrogacy on their website with many stock photos of very fair-skinned women and babies: "Carefully handpicked. All our surrogates are carefully selected based on a stringent series of fertility criteria, with the most significant being age. Members of our surrogacy pool are all young, fit and healthy.” 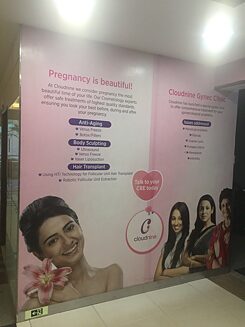 © The Agency In our research, we were initially interested in the emotional management that all participants, but especially the surrogate mothers, perform, who, contrary to all naturalising ideas of "motherhood", carry a child and hand it over to the commissioning parents. But now we discover a global market in which sperm, eggs, surrogate mothers and medical knowledge with the clinics as local hubs move from one country to the next, from one legal loophole to another. The research by sociologist Amrita Pande ("Wombs in Labor", 2014), who has been visiting India's most famous clinic, Dr. Nayna Patel's Akanksha Clinic in Anand, Gujarat, and was interviewing surrogate mothers over several years, was the perfect start for us. And it was very quickly clear to us: we also have to go to Anand.

But first we had to learn coping with the everyday life here in Bangalore. The city is physically overstraining, the noise, the traffic, the languages, the food. Small tasks like shopping or washing clothes are a challenge. But the biggest problem for us is the lack of mobility: Walking long distances is very difficult, because sidewalks are non-existent or in very bad condition, so you mostly walk on the streets and in Bangalore it is rush hour all day and everywhere. For an appointment we usually sit in car or rickshaw for at least 45 minutes (one way). After our visit to Flo Maak (bangaloREsident@Pepper House) in the quiet and manageable city of Kochi we realised that traffic is a problem specific to Bangalore, which has become extremely acute in the last 20 years due to the rapid growth of the city.

Our hosts Nimi and Shiva from Sandbox Collective are curating a festival at the Ranga Shankara Theatre during our residency - here, as well as on many other occasions in the cultural environment of the Goethe-Institut, we met people from Bangalore, other artists who increasingly became our network in Bangalore and also in other cities. Through this we made contact with people whom we interviewed for our research and whose personal stories gave us a varied picture of the living situation in India. 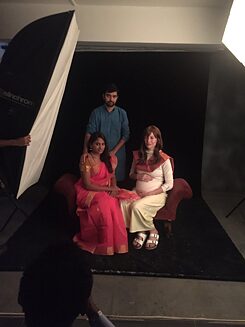 © The Agency We begin to plan the presentation of our research - a performance for which we will rent the lounge of a WeWork Coworking Space in the middle of Bangalore. In the form of an event for the investors of a young start-up, we want to present the fictitious company "AshramMommies", whose offer combines the spiritual search of Western young women with the needs of infertile Indian couples. Here is an image from the photo-shoot for "AshramMommies".

After the budget discussion with the Goethe-Institut, we now also started planning our trip: Our first destination was Mumbai - to see the play "I am not here" by Deepika Arwind, with whom we want to work for our presentation of the research. Then we take the train north to Anand, known throughout India for Amul, a cooperative that since the 1950s has transformed India from a "milk deficit" country to the world's leading producer and consumer of dairy products. But we have one goal in mind above all: the Akanksha Clinic. Only the day before we finally got an answer from Dr. Nayna Patel to our request for a meeting: "ok. come and see me tomorrow." And indeed: We meet Dr. Nayna Patel, are taken to the "Surrogate Home", where we sit around a canteen table with 30 pregnant surrogate mothers and learn about their working conditions, living situation and their pride in producing healthy children: "I have had two babies already as a surrogate, one 3.5 kg. And one 3.2 kg." And finally, a young gynaecologist, coincidentally the daughter-in-law of Dr. Patel, tells us about all the services offered by the family business Akanksha Clinic from "surrogacy" to "G-spot augmentation" and "vagina tightening", before she presents to us the "Human Milk Bank". In the dark, we step out of the glass doors of the Akanksha Clinic into the Palm Garden, ready to depart in a rickshaw, while the Akanksha branding slogan "more than a mother" vibrates in our minds. 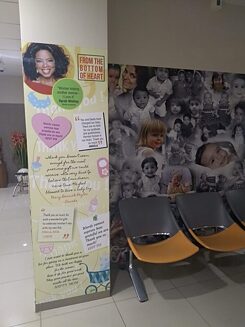 © The Agency
Back in Bangalore, the rehearsals begin. The many things and ideas we collected and our European view are repeatedly checked in the conversations with Deepika and some of them fortunately also are thrown overboard: e.g. that fruit bowls in the shape of a lotus (a symbol recently claimed by BJP party) are rather not read as a shallow symbol of spirituality in the current political situation, which names for the characters convey the right image or also which bangles look classy or cheap.

After a short and intensive rehearsal phase we present "AshramMommies - Investors Lounge" at the WeWork on Church Street with Deepika, Sandbox and the "Goethe Buddys" Charlotte and Moira (production assistants, social media experts and as it turned out stage managers and performers).

© Charlotte Rauth During and after the presentation of "AshramMommies" we discussed global hierarchies in relation to reproduction, but also in relation to artistic working methods, the white gaze, cultural appropriation and ideologies around motherhood. 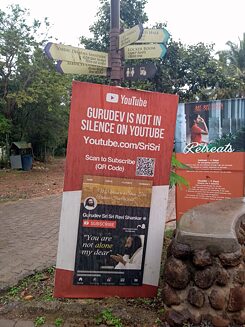 Now our time in Bangalore is coming to an end. We are posting 23 kg of mail to Germany, with costumes and props from "AshramMommies" and everything we can do without during our subsequent travel. After our final meeting with the Goethe-Institut and a dinner at Sandbox, we now have one more thing to do: a stay at the most famous Ashram in Bangalore: Art of Living.

The image of India as a place of spiritual experience has led to an increasing offer for western tourists in the last decades. Optimised commercial forms include yoga and Ayurveda retreats, ashram stays with classes for meditation, breathing techniques or silence. The cults of the so-called "Godmen" (Bhagwan), which are largely supported by the work of volunteers and generate billions in donations, are also aimed at Indian audiences. The Art of Living Ashram with its own Vedic School for young men and Indian cattle breeding, whose Happiness Beginners Programme we participate in (for a donation of $350 per person), is divided into different areas and also has a chic new yoga centre with an Instragram-ready garden and fancy bungalow accommodation.

The international Art of Living Foundation advises the United Nations, is Unicef certified and has its "European Centre" in the Black Forest in Germany. Rumour has it that Guru Sri Sri Sri Ravishankar is also expecting the Nobel Peace Prize soon. We take home a bookmark with the following inscription: "Rice is purified by ghee, our body by Ayurveda, our intellect by knowledge, our emotions by satsang and our soul by meditation, similarly, our money is purified by charity".