Because of the overwhelming diversity of hip-hop culture, it is difficult to portray paradigmatic changes: Since its emergence forty years ago, the music from the Bronx has become the world's dominant pop-cultural force par excellence. The following are only six exemplary moments — countless others are missing.

1. Sugarhill Gang, Rapper's Delight (1979)
“Now what you hear is not a test, I’m rapping to the beat / And me, the groove and my friends are gonna try to move your feet.” The first stanza of the fifteen-minute rap epic (and its first big sales success) already makes it clear what it's all about: moving your feet. To make things dance. This is literally a music of the streets, the working classes, block parties, but it is already looking around the corner at the banking tower of Manhattan.

2. Public Enemy, Fight the Power (1989)
Public Enemy’s chief ideologue and main rapper Chuck D rages at all-American idols like Elvis Presley and John Wayne and proclaims: "We gotta fight the powers that be!" The song sounds like a soundtrack for the coming rebellion, yet musically it’s extraordinarily complex, sampling James Brown and civil rights orators, and with a saxophone solo from jazz legend Branford Marsalis. The academic elite shows interest in this kind of music for the first time; musicologists analyze the track until it's coming out of their ears.

3. Cornel West, Sketches of My Culture (2001)
Since Cornel West, professor of theology and African-American Studies at Princeton and Harvard, likes to fall into rhythmic chanting in talks and lectures, and has always treated hip-hop in his theoretical writings, it was only a matter of time before he would release his first rap and spoken-word album. The result was not necessarily an aesthetic game changer for hip-hop, but it did take the genre deep into the sacred halls of the Ivy League. 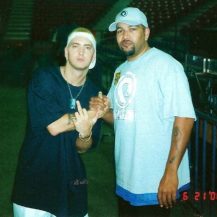 Eminem at the „Up in Smoke Tour“ 2000 | © Mixxula, Flickr, edited, CC-BY-2.0 4. Eminem, The Marshall Mathers LP (2000)
At about the same time, a platinum-blond kid from Detroit with virtuoso rhyming verbal insults and the powerful support of gangsta rap veteran Dr. Dre became the financially most successful rapper of all time. Eminem's autobiographical reports from the white working class made hip-hop compatible with the Western mainstream. At the same time, the LP introduced advanced postmodern narrative forms to hip hop with songs like Stan.

5. Wu-Tang Clan, Once Upon a Time in Shaolin (2015)
Have Wu-Tang Clan mastermind RZA or his producer Cilvaringz read Walter Benjamin's essay on “The Work of Art in the Age of Mechanical Reproduction”? The double album Once Upon a Time in Shaolin seems at any rate like a response to Benjamin's famous work. Only one copy of the CD was pressed, and this auratic one-off was sold for two million dollars. In an interview, RZA and Cilvaringz denied all allegations of financial elitism and pointed to the gritty sound. Bitter irony: the buyer was, of all people, the pharmaceutical mogul Martin Shkreli.

Kendrick Lamar: The DAMN. Tour, Boston | © Kenny Sun, Flickr, edited, CC-BY-2.0
6. Kendrick Lamar, DAMN. (2017)
Lamar's fourth album climbed to No. 1 on the American Billboard charts when released; it sold over three million copies, the lead single landed on Barack Obama's year-end playlist, and in addition to a Grammy, Lamar received the Pulitzer Prize for the album. All this for a work that has musically rough edges and whose lyrics are marked by Lamar's childhood and youth in Compton: "I know murder, conviction / burners, boosters, burglars, ballers, dead ...". The street and the White House, poverty and success, popularity and elitism were probably never closer together.

Florian Werner, born in Berlin in 1971, studied English, American, and German Studies, and did a doctorate on apocalyptic themes in hip-hop (Rapocalypse, transcript 2007). He writes prose and narrative non-fiction books, plays soccer at the German national author’s soccer club, teaches as a visiting lecturer at various universities, and works for radio broadcasting. His books, such as Cow: A Bovine Biography (Die Kuh. Leben, Werk und Wirkung. Nagel & Kimche 2009), were translated into English, Spanish, and Japanese, and earned multiple awards. His latest work is Der Weg des geringsten Widerstands. Ein Wanderbuch (Nagel & Kimche 2018). Florian Werner works in Berlin, where he lives with his wife Svenja Flaßpöhler, a philosopher and author, and their children.