The Elite in the Arts | Visual Arts
Dada: Beyond "Elite" and "Popular"

The artists, writers, performers and provocateurs known as Dada broke down the polarities of “elite” and “popular,” and transformed the arts. Between 1916 and 1924, they not only reworked the concept of “art,” but also remade popular forms and materials, turning items of everyday culture into powerful manifestations of complex concepts and questions. Their goal was a critique of bourgeois society’s blind spots, the conservative class’s definitions of politics, religion, and art, which, they believed, had opened the door to World War I’s horrors and turbulent aftermath.

Against this “deadened” world, Dada deployed its jolting “anti-art” tactics, first in Zurich, and then in Berlin, Cologne, Hannover, New York, Paris, and beyond. Wherever it went, Dada’s difficult, sometimes contradictory, strategies drew both audiences of the like-minded and those enticed by the shock of the new and unpredictable.

Dada began in February 1916 at Zurich’s Cabaret Voltaire, a small, smoky bar that became an “artists’ club, exhibition hall, pub and cabaret”.1 Escaping into neutral territory, the international group of Hans Arp, Tristan Tzara, Marcel Janco, Sophie Taeuber, Hugo Ball, Emmy Hennings, and Richard Huelsenbeck “sang, painted, made collages and wrote poems” while “guns rumbled in the distance.” Their “multimedia” cabaret allowed for individual experimentation while they proclaimed shared goals of independence, reinvigorated consciousness, and an end to cultural stagnation and war. They hung Cubist paintings, Expressionist posters, and abstract masks. They played popular songs and music, read sound poems and manifestos, and staged satirical shows. Soon the Cabaret attracted both the committed and curious who came for performances like Hugo Ball’s Karawane, a “nonsense poem” he read while dressed in a cardboard costume before an increasingly “frenzied” audience.

© 2.0 Generic (CC BY 2.0)
In New York, French artist Marcel Duchamp, having fled Europe, was refining his ready-made concept. He appropriated mass-produced objects – a bicycle wheel, a bottle rack, a snow shovel – and by exercising artistic choice, shifted the items into new contexts, redefining them as art. As R. Mutt, he pseudonymously submitted Fountain to the 1917 Society for Independent Artists exhibition, a “democratic” event whose submission policy stated that “any artist paying $6 can enter.” But organizers refused Fountain, a urinal turned upside down. Duchamp secretly retrieved the urinal and asked Alfred Stieglitz to photograph it before it went missing. Duchamp not only “created a new thought” for the object, he had turned the object into thought itself.

Stieglitz’s photograph appeared in Duchamp’s The Blind Man, one of many “little magazines” published by the avant-garde. Like the Cabaret, the magazine format’s diverse but integrated contributions asserted Dada as a unified community of independents, interrogated the boundaries between art and popular culture, and documented and disseminated their work. Dada’s periodicals – Zurich’s Cabaret Voltaire (1916) and Dada (1917–1921), Berlin’s Der Dada (1919–1920), Hannover’s Merz (1923–32), and Cologne’s Die Schammade (1920), among many others – were printed in smaller numbers for specialized, but increasingly international, readers. Playing with typical magazine formats, the journals mixed texts and images in unusual ways, disrupted advertising and design conventions, and spread vanguard concepts to ever-broadening audiences.

© 2.0 Generic (CC BY 2.0)
The Dadas also took on art institutions whose “timeless” ideals of “high” culture were at odds with their beliefs in independence and an art responsive to the urgencies of the present. An early form of “institutional critique,” the Dadas’ appropriation of exhibitionary formats made their point. In 1920, the Berlin Dadas organized the landmark Erste Internationale Dada-Messe, its name sounding more like a trade fair than a fine art exhibition. The deeply political show, a visual cacophony of paintings, assemblages, photomontages and printed texts, included works from Zurich, Berlin, Cologne, and Paris. The walls sported slogans like advertisements and broadsides, challenging the public to “Join Dada, it’s worth it” or exhorting “Dilettantes, rise up against art”. Overhead, the Prussian Archangel, a pig-headed mannequin in an officer’s uniform, patrolled the riot of texts and images below. This work, with Grosz’s anti-militaristic portfolio Gott mit uns (God with Us), led to charges of defaming the German army. While the Dada-Messe attracted hundreds of visitors and attention from the international press, this suppression ominously foreshadowed Dada’s inclusion in the Nazi’s infamous 1937 Degenerate Art exhibition - where the slogan “Take Dada seriously, it’s worth it” appeared mockingly above modernist works cast out of German museums and declared a danger to “true” German culture.

Both Dada’s “life” and “death” were short-lived. Artists and writers, seeking the sources of modern art or solutions to old ways of thinking, “resurrected” Dada in the postwar era. The Dadas’ early manifestos, memoirs, and histories of the movement were soon translated and read by international audiences. In 1951 American painter Robert Motherwell reintroduced Dada through his groundbreaking publication of newly translated and presented Dada sources, The Dada Painters and Poets: An Anthology, which became an influential sourcebook for artists and scholars. In 1954 German artist and writer Willy Verkauf published Dada: Monograph of a Movement, which, along with Motherwell’s volume, sowed the seeds of the watershed 1958 Düsseldorf exhibition Dada – Dokumente einer Bewegung. 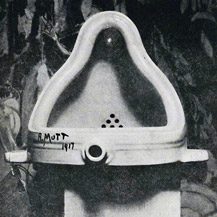 Fountain von Marcel Duchamp | © Alfred Stieglitz, Wikipedia, edited, CC0-1.0 These and other publications and exhibitions in the 1950s catalyzed international artists, writers, and thinkers to adapt Dada strategies for new generations. In the visual arts alone, practitioners of Neo-Dada, Fluxus, and Pop in the 1960s, conceptual artists in the 1970s, and postmodernists in the 1980s, were all indebted to Dada in different ways. Dada’s legacy also leapt into the popular imagination: street art, punk fashion, mashups and remixes, guerilla marketing, and political strategies like direct protest, interventionist actions, and cultural critique have all taken cues from Dada. Most recently, blockbuster exhibitions like the 2006 Dada exhibition in Washington DC, New York, and Paris, and the 2016 100-year anniversary of the Cabaret Voltaire, have carried Dada into the twenty-first century. Dada’s engagement with notions of “the popular and elite” has led not to their dismantling but to a continuing interrogation of their meanings and impact. 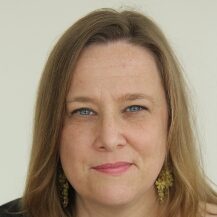 Kathryn M. Floyd is Associate Professor of Art History at Auburn University where she teaches courses in modern and contemporary art in Europe, the US, and Africa, as well as in the history of photography. Her research is primarily concerned with the history and historiography of art exhibitions, especially in twentieth-century Germany. She has conducted extensive research on the history of the periodic German exhibition documenta (Kassel, Germany). Her current book project concerns the history, function, and meaning of photographs of exhibitions. Dr. Floyd also studies and writes about the history of Dada. She formerly worked as an assistant to the Curator at the International Dada Archive at the University of Iowa Libraries, and she recently served as a guest editor for a special issue of the journal Dada/Surrealism on the history of avant-garde exhibitions and displays.